A HAUNTED MAN. A BURIED PAST. A JOURNEY INTO DARKNESS.

‘Brother, a dead body can’t run from a coffin, but their spirit sure as hell can try.’

1967, Bristol. Life is tough for JT Ellington, ex-cop and reluctant private eye. He’s still trading in favours, helping those scared of the police or trying to stay one step ahead of the law.

But when news arrives of a tragedy that’s unfolded thousands of miles away, JT’s life gets even tougher. He needs to journey home to Barbados to pay his final respects but first he must travel to New York, where his cousin Vic is boss of a criminal empire.

On Harlem’s mean streets, JT is fast entangled with Evangeline a smooth as velvet Black Panther along with Pigfoot, a Bajan too flash with his knife. As the underworld draws him in, JT discovers the extent of Vic’s criminal activities a web of violence that stretches to Barbados and back, and connects him to the deaths of JT s beloved wife and daughter.

Embroiled in a world of drugs, corruption, voodoo and the legacy of slavery, can JT escape the demons of his past as he returns to the island of his birth?

I’m late to this particular book, but only because for some odd reason Netgalley had listed the publication date as 1st November 2018. Whatever, I am very glad indeed that I have got to it, because it is a punchy, transfixing, action packed read.

Note that this is the third in a trilogy of books about this character and whilst it reads perfectly well as a stand -alone, I enjoyed it so much that it left me wishing I had read the series from the beginning (something I will now do).

The novel begins some years earlier than the setting of 1967 with our protagonist  JT and his sister Bernice. Off for a day’s fishing in St Philips, Barbados they are young and carefree, larking around until they come across the body of a dead police man.

Fast forward and JT is living in a narrowboat in Bristol Harbour in 1967, eking out a living as a private enquiry agent having being forced to leave his Barbados home after being set up in his previous job as a policeman. His wife and child were killed in a fierce home fire and J.T. has escaped the island to mourn his loss.

But his troubles start again when his postman and drinking buddy brings him a telegram with the worst possible news. His sister Bernice has died and his cousin Vic, never knowingly on the right side of the law, has arranged for him to travel home to Barbados to wind up her estate, via New York and New Orleans.

Permeating his journey, from Bristol to London and on through NYC to New Orleans and Klan country, is the shocking scale and range of the racism encounters. It is all too easy to forget that this was only 50 years ago and the treatment that the Windrush generation received, making the reader only too aware of the reasons why many immigrants felt and still sometimes feel, like second class citizens in their own country.

Racism isn’t the only ever present enemy though. As JT reminisces about  life with his mother, Cora and Clifford, his cruel drunk of a father the reader learns more about JT’s upbringing and how his family came to be involved with the Monroe family. A white family on Barbados whom JT despises because a Monroe was responsible for the deaths of his wife and child.

Evangeline Laveau telephones JT on his cousin Vic’s behalf and makes all the arrangements for his travel, even accompanying him from NYC to New Orleans.

In New York, Evangeline and her minders take JT straight to Harlem where he encounters a witch doctor named Obeah and receives a strange gift in the form of a miniature coffin. Its really not clear what is going on at this point but rest assured the story gets clearer.

Evangeline herself is young, beautiful and strong – and a committed member of the black struggle movement, The Black Panthers. M.P.Wright shows us the unvarnished violence and raw racism of the deep South which helps us in understanding how the Black Panther movement came into existence, and why their view encompassed armed struggle. He also shows us just how they achieved their arms and what role JT’s cousin Vic had in their affairs.

After a great deal of violence, bloodshed and death JT and Vic finally come together to travel back to Barbados. There JT learns the whole truly shocking story of Bernice’s death and Vic and Monroe’s activities. This is the denouement that Wright has been building up to and you can feel JT’s heart hardening and his rage growing as he understands the enormity of the crimes he is told about.

He has been lured into Vic’s sorry life of drugs, violence and death and now he must decide whether he can overcome his innate law abiding nature and kill for revenge. This is material for the strong of stomach and some of the violence is very gory, but the research feels solid and although I wasn’t at all sure that the use of patois was going to work for me, in the end it was fine because it all made sense in the action of the book.

JT is an interesting and emotionally reserved character, who takes a long time to get to breaking point.  I was less enamoured of Vic, who I think has trouble with a capital T written all over him.

Restless Coffins is a novel redolent with sights, sounds and smells, enabling the reader to experience the locations. I could almost smell that gumbo. The book is full of tension and action heavy, yet packed with observation, is not without humour and is a great way to understand some of social conditions in 1960’s Britain and America.

JT Ellington himself is a subtle and nuanced character with a deep emotional reserve and a heart breaking backstory – and that’s what makes you care so much about him.

Verdict: A fascinating protagonist with a deep backstory who shines a light on 1960’s America in a punchy, action packed story. A terrific read. 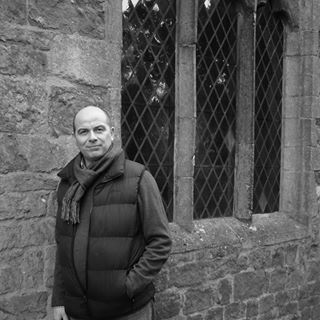 Mark Wright was born in Leicestershire in 1965. He was employed in various roles within the music industry before working as a private investigator. He retrained in 1989 and spent the next twenty years in the mental health and probation services in the UK, specialising in risk assessment. A self-confessed aficionado of film, music and real ale, and father of two beautiful daughters, Mark lives with his wife and their two Rottweiler dogs, Tiff and Dylan.

Portable Magic
The Girl With All The Crime Books
Nerxes.com