What do you do when someone takes advantage of your greatest weakness?

When Laura wakes up after her office Christmas party and sees a man’s shirt on the floor, she is horrified. But this is no ordinary one-night-stand regret.

Laura suffers from severe face-blindness, a condition that means she is completely unable to identify and remember faces. So the man she spent all night dancing with and kissing – the man she thought she’d brought home – was ‘Pink Shirt’.

But the shirt on her floor is blue.

And now Laura must go to work every day, and face the man who took advantage of her condition. The man she has no way of recognising.

I enjoyed the intensity of Emma Curtis debut novel, One Little Mistake, so I was intrigued to read her second book. It did not disappoint.

When I Find You isn’t the first book dealing with face blindness or propagnosia as it is called, this year. It is however by far the most interesting. Because Emma Curtis makes you feel what it is like not to be able to recognise those closest to you by their facial features. More than that, she lets you feel how terrifying it must be in a whole number of situations when you simply have no idea who you are talking to.

Once you have that sense, an idea of how difficult navigating life is with this condition,  Curtis then asks you to factor in a party, alcohol and a rape. All at once I understood how truly awful this condition can be.

Laura is Creative Director at one of London’s successful ad agencies.  She has made the bold (stupid?) choice to say nothing to anyone about her condition, except for her boss, Rebecca, one of the Agency’s two managing partners.

She manages fine in the main by identifying people through their hair, clothing, where they sit and what they talk about. But when she goes home after the Christmas Party with a man, she realises when she wakes up that this is not the man she thought she was going home with.

That’s the centrepiece for what is a fascinating series of moral questions that would not look out of place on the Moral Maze.

I learnt quite a lot from this book which set me thinking across a range of moral and ethical considerations not to mention how the law might deal with such a situation.

In this tale of corporate behaviour, love, lies and betrayal, no-one behaves entirely as well as they might and some are downright despicable. But in the middle is Laura, intelligent, capable, creative, but at a huge personal disadvantage because of her face blindness.

As Laura struggles to work out who could have so slyly and cruelly deceived her, Curtis also offers an insight into the lives of others working in the Agency and how they live their lives.  Laura’s boss Rebecca has her own problems with David, the Agency’s co-founder and the story is narrated in alternating chapters by Laura’s first-hand account and then from Rebecca’s third party perspective.

Curtis’ style is good and my empathy for Laura’s character was strong. As the book builds into a twisted and tense psychological thriller, Curtis has you constantly second guessing the perpetrator, and just when you think you have, bang –she turns the readers thinking on its head.

Verdict: Well researched, nicely plotted with several strands that tie together well, this was an interesting, unusual and highly enjoyable thriller that set me thinking. 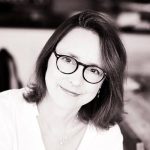 Emma Curtis was born in Brighton and brought up in London. She is a member of ‘The Prime Writers’, a collective of writers who have all had their first books published after the age of 40.  Emma has two children and lives in Richmond with her husband.