For four years Jessica has never doubted that her sister Isabel’s death was an accident. But when Jessica’s young daughter seems to know long-forgotten details about her aunt’s past, Jessica can’t shake the feeling that there’s a more sinister truth behind the tragedy.

As Jessica unearths disturbing revelations about her sister, and about the people she loved and trusted most, it becomes clear Isabel’s life was less than perfect and that Jessica’s might also be at risk.

Did someone murder Isabel? Are they now after Jessica and her family? The key seems to lie in the hands of a child. Can Isabel reveal the truth from beyond the grave, or is the answer closer to home?

If Mark Edwards were a wine he’d be fast flowing and smooth, strong and chilling, turbulent in patches and finish with a flourish.  It’s always easy to read a Mark Edwards book. There’s a light touch to his writing that quickly immerses you in his characters and their stories, and makes it easy for you to accept his premise, even when that premise has you looking askance to begin with.

At the heart of his books are stories of loss, loss and family secrets; that’s what makes them so universally popular. In In Her Shadow, we meet Jess, Will and their 4 year old daughter, Olivia. Jess starts to get a bit worried when Olivia begins acting up in school. Usually a cheerful child, Olivia’s imaginary friend seems to be the cause of her change in behaviour.

But when Jess discovers that this imaginary friend is Izzy, her older and more glamorous sister who died in an accident just before Olivia was born, she begins to think she may be losing her mind.

Jess’s concerns are not helped by her slightly dotty mother, who is a believer in the paranormal and who has always been convinced that her eldest daughter’s death was no accident. She has never really liked Isobel’s grieving husband, Darpak since that day, though he remains true to Isobel’s memory and still grieves her loss.

When Olivia whispers to Jess that Izzy’s death was not an accident, Jess starts to search for answers to her daughter’s behaviour and in the process to find out the truth about her sister’s death. In her quest to discover the truth, she will question everything she knows about her close family and more than one member will fall under suspicion as she delves into Isobel’s secrets and lifestyle.

What she finds reveals a picture of her sister she didn’t really know as well as she thought, and she puts her own life under threat as she retraces her sister’s last days.

Told predominantly from Jessica’s perspective, with flashbacks to Izzy’s past, Mark Edwards skillfully weaves paranormal elements into a well told story that involves love, obsession, sex  and drugs. His twists are frequent and surprising and though there are a number of false leads, the conclusion is both logical and surprising.

Mark Edwards will always be a writer I turn to when I want an addictive, easy read. This book, whilst enjoyable and engrossing didn’t quite hit the 5 star mark for me, partly I think because there was so much going on that the chilling elements got a bit lukewarm, but it was still a solid, engrossing and enjoyable read. Can’t ask for more than that! 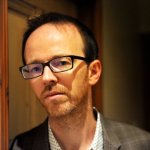 Mark Edwards writes psychological thrillers in which terrifying things happen to ordinary people. Mark’s first solo novel, The Magpies (2013), reached the No.1 spot on the Amazon UK Kindle bestseller list, as did his third novel Because She Loves Me (2014), and Follow Me Home (2015). His previous novels, The Devil’s Work (2016) and The Lucky Ones (2017) were also published to great critical acclaim and commercial success. He has also co-written various crime novels with Louise Voss such as Killing Cupid (2011) and The Blissfully Dead (2015). His titles with Amazon Publishing have reached over a million readers.

Mark grew up on the south coast of England and started writing in his twenties while working in a number of dead-end jobs. He lived in Tokyo for a year, and is a great admirer of Japanese writers and horror films. Mark lives near Wolverhamtpon, England, with his wife, their three children and a ginger cat. The Retreat was strongly inspired by local folklore and urban myths from Mark’s childhood and by his daughter Poppy. When walking their dog in the woods, Poppy told Mark a story about her friends arguing about whether a local legend was true or not. Poppy and Mark would brainstorm ideas for the book on their daily walks, and Mark now credits her as his co-writer and a budding author herself.