The Murder of Harriet Monckton is based on a true story that shocked and fascinated the nation.

On 7th November 1843, Harriet Monckton, 23 years old and a woman of respectable parentage and religious habits, was found murdered in the privy behind the dissenting chapel she had regularly attended in Bromley, Kent. The community was appalled by her death, apparently as a result of swallowing a fatal dose of prussic acid, and even more so when the autopsy revealed that Harriet was six months pregnant.

Drawing on the coroner’s reports and witness testimonies, the novel unfolds from the viewpoints of each of the main characters, each of whom have a reason to want her dead. Harriet Monckton had at least three lovers and several people were suspected of her murder, including her close companion and fellow teacher, Miss Frances Williams. The scandal ripped through the community, the murderer was never found and for years the inhabitants of Bromley slept less soundly.

This rich, robust novel is full of suggestion and suspicion, with the innocent looking guilty and the guilty hiding behind their piety. It is also a novel that exposes the perilous position of unmarried women, the scandal of sex out of wedlock and the hypocrisy of upstanding, church-going folk.

As we tread softly into October’s chilled dark nights, my thoughts turn to dark deeds, warming stews, hearty soups and a meaty, chunky read.  The Murder of Harriet Monckton fits perfectly into this agenda.

This is a beautifully written, utterly absorbing story based on historical fact. It is poignant, heart breaking and yet resonates with everything that is happening in the #metoo movement today.

I was totally drawn into this book. From the outset, the sense of time and place felt so vivid and real. There are all characters that you can put faces to, as you read about the daily lives and worship in the small town of Bromley.

Harriet’s story is told by several different characters, each having their own perspective, all of them with a plausible motive for her murder.  These are not simple recounting, but more of an internal monologue which allows the reader to understand the thoughts as well as the actions of the various people in Harriet’s life.

Poor Harriet was only 23 years old when she was found dead in the privy of her local chapel. Six months pregnant and unwed, her death from Prussic acid poisoning shocked the community. Elizabeth Haynes story takes us through the discovery of Harriet’s body and into the post mortem evidence where the coroner’s court hears the story of Harriet’s life, her friendships and acquaintances as witnesses are questioned as to their knowledge and whereabouts on the night of her death.

The hypocrisy of life in a small community; the sexism of men who take advantage because they can; the dreadful cant that is self -advantage masquerading as religious good – all is exposed in this story of Harriet as seen through the eyes of others.

I really felt I got to know Harriet and that made her death so much more tragic. A bright, intelligent woman brought to despair because of the vile actions and hypocrisy wrought on her by others simply because she wanted to be loved.

Elizabeth Haynes skillfully brings her characters to life and shows us what life in 1840’s Bromley was like. And as her research fills out the picture of Harriet’s life and death, we realise that even today, some things have changed very little.

Verdict: Outstanding, fascinating read. One for the *must read* list. 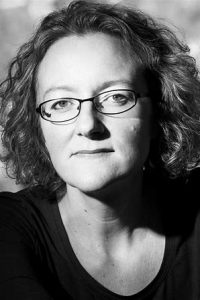 Elizabeth Haynes is former police intelligence analyst. Her first novel, Into the Darkest Corner, has been published in 37 countries. It was Amazon’s Best Book of the Year and a New York Times bestseller. She has written a further three psychological thrillers—Revenge of the Tide, Human Remains and Never Alone —and two novels in the DCI Louisa Smith series, Under a Silent Moon and Behind Closed Doors.

See what others are saying: follow the blog tour