You need to know who your husband really was…

When Paula Gadd’s husband of almost thirty years dies, just days away from the seventh anniversary of their son, Christopher’s death, her world falls apart. Grieving and bereft, she is stunned when a young woman approaches her at the funeral service, and slips something into her pocket. A note suggesting that Paula’s husband was not all that he seemed…

When the two women eventually meet, a series of revelations challenges everything Paula thought they knew, and it becomes immediately clear that both women’s lives are in very real danger.

Both a dark, twisty slice of domestic noir and taut, explosive psychological thriller, After He Died is also a chilling reminder that the people we trust the most can harbour the deadliest secrets…

There are some authors you turn to because you know what you are going to get. There’s a tried and trusted formula there that feels comforting and never lets you down.

Michael J. Malone is not one of those authors. Constantly surprising, never, ever predictable, you just do not know what’s coming your way. I love that – feeling constantly surprised and kept on my toes. My goodness this book is deliciously different.

From that first hook in the crematorium– the note slipped in the pocket, the whisper in the ear, I was transfixed.

After He Died takes beautifully drawn characters and immerses them in a drama that has the reader questioning the motives of those closest to the grieving widow, Paula Gadd, and makes us ask ourselves how well we know anyone.

Paula’s husband, Thomas, died suddenly. The fact that it happened just days away from the anniversary of their only son, Chistopher’s death just makes the pain more difficult to bear. So when she is approached by Cara who claims that she didn’t know her own husband at all, she is inclined to be dismissive, but in her grief, Cara’s words keep taunting her and she has to find out what Cara says she knows.

This novel combines recent press stories about the legal anomaly that makes Scotland the  home of some deeply dubious shell companies and melds this alongside the scourge of Scotland – it’s urban poverty, drugs and homelessness problems to create a psychological thriller that is both edgy and unpredictable.

Skilfully blending fact and fiction in a book that benefits from some excellent research, Malone has created a book that explores family dynamics, love and loyalty and creates a dark and believable tale that rings true and clear.

Original, authentic, completely immersive, this is the kind of beautifully written fiction that grabs from the get go and never lets up until the final, exciting pages.

Verdict: Much more than a domestic noir; unpredictable, exciting and rooted in reality.

Michael Malone is a prize-winning poet and author who was born and brought up in the heart of Burns’ country. He has published over 200 poems in literary magazines throughout the UK, including New Writing Scotland, Poetry Scotland and Markings. Blood Tears, his bestselling debut novel won the Pitlochry Prize from the Scottish Association of Writers. Other published work includes: Carnegie’s Call; A Taste for Malice; The Guillotine Choice; Beyond the Rage; The Bad Samaritan and Dog Fight. His psychological thriller, A Suitable Lie, was a number-one bestseller, and the critically acclaimed House of Spines soon followed suit. A former Regional Sales Manager (Faber & Faber) he has also worked as an IFA and a bookseller.

Don’t just take my word for it, see what others are saying: 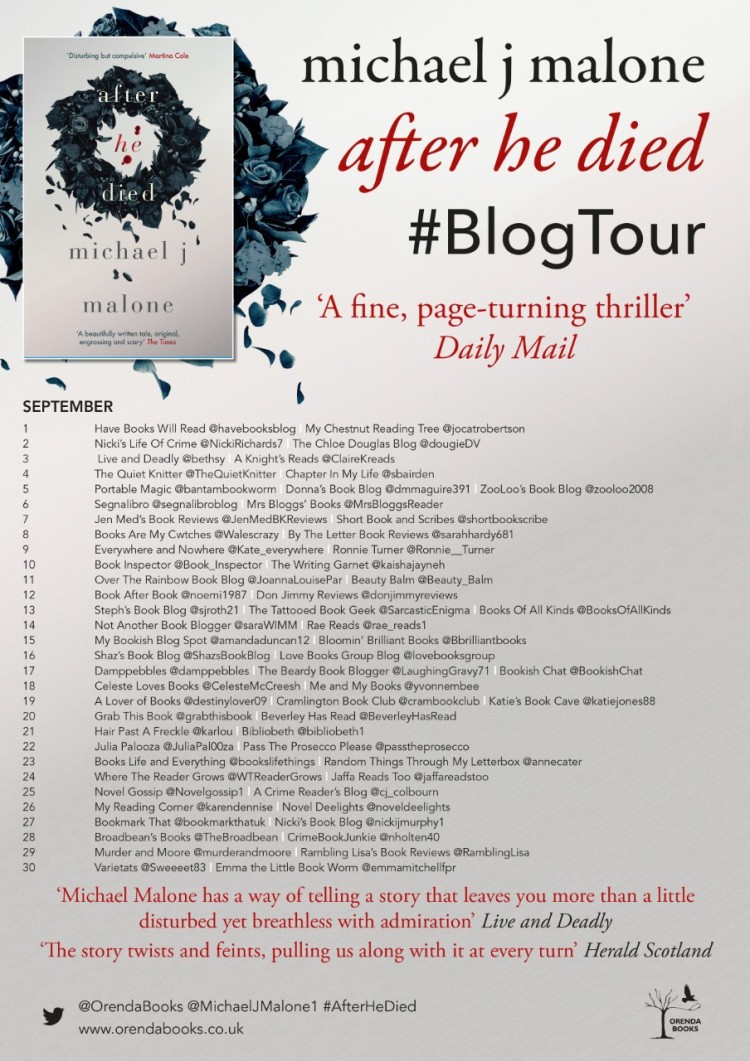 5 thoughts on “After He Died by Michael J. Malone @MichaelJMalone1 @OrendaBooks @AnneCater”