When silence falls, who will hear their cries?

The body of a young girl is found dumped on the roadside on the outskirts of Edinburgh. When pathologists examine the remains, they make a gruesome discovery: the silhouette of a doll carved in the victim’s skin.

DCI Ava Turner and DI Luc Callanach are struggling to find leads in the case, until a doll made of skin is found nestled beside an abandoned baby.

After another young woman is found butchered, Luc and Ava realise the babydoll killer is playing a horrifying game. And it’s only a matter of time before he strikes again. Can they stop another victim from being silenced forever – or is it already too late?

Helen Fields has done it again. With echoes of Silence of the Lambs, she has produced another gruesome killer in what the tabloids inevitably dub the ‘babydoll killer’.

I love Helen Fields’ books; she toes the delicate line between gruesome and fascinating very well and just when I think she may have overdone it, she pulls back and the full humanity of her central characters kicks in and gives us a well-rounded story where the victims are more than mere cyphers on a page.

In Perfect Silence, DCI Ava Turner has a lot of hefty political weight to deal with. Not only is a nasty serial killer at work, but there has also been a series of unprovoked and vicious assaults on the homeless in Edinburgh.  Unsurprisingly, the powers that be are far keener on one set of crimes being solved than the other.

With enhanced scrutiny from the Police Authority, Ava is on a collision course with her PR savvy boss, Superintendent Overbeck, and though Ava has some useful knowledge to trade, she’s not the kind of unprincipled cop that does deals at the expense of the truth.

DI Luc Callanach is developing his relationship with Selina, who is certainly getting keen and this book does focus a little more on the interpersonal relationships of the characters in the book. Even D.S. Lively has some personal down time!

Turner is now overseeing the Major Investigations Team but this in turn adds to the slightly off centre relationship she has with Callanach, who now reports to her.  Turner must find a way to be true to herself and her policing instincts while still toeing the line of a senior commander.

Helen Fields has written another cracker of a crime thriller with characters you can’t help be drawn to, a plot that is both dark and dramatic and tension that floods the narrative and keeps the reader on their toes. The pace is relentless and the denouement this time especially surprising.

Verdict: Another cracker of a crime thriller in this unputdownable series. 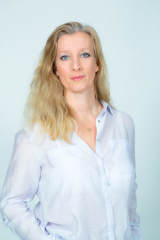 Helen Fields’ first love was drama and music. From a very young age she spent all her free time acting and singing until law captured her attention as a career path. She studied law at the University of East Anglia, then went on to the Inns of Court School of Law in London.

After completing her pupillage, she joined chambers in Middle Temple where she practised criminal and family law for thirteen years. Undertaking cases that ranged from Children Act proceedings and domestic violence injunctions, to large scale drug importation and murder, Helen spent years working with the police, CPS, Social Services, expert witnesses and in Courts Martials.

After her second child was born, Helen left the Bar. Together with her husband David, she went on to run Wailing Banshee Ltd, a film production company, acting as script writer and producer.

Helen self-published two fantasy books as a way of testing herself and her writing abilities. She enjoyed the creative process so much that she began writing in a much more disciplined way, and decided to move into the traditional publishing arena through an agent.

The Perfect series is set in Scotland, where Helen feels most at one with the world. Edinburgh and San Francisco are her two favourite cities, and she travels whenever she can.

Beyond writing, she has a passion for theatre and cinema, often boring friends and family with lengthy reviews and critiques. Taking her cue from her children, she has recently taken up karate and indoor sky diving. Helen and her husband now live in Hampshire with their three children and two dogs.