Thursday was another brilliant and eclectic day at the fabulously vibrant Edinburgh Book Festival.

I started my day with a panel session from Andrew Wilson and Nicola Upson. A brilliant pairing, because both writers do something really quite interesting with their crime fiction. Both are writers of what is usually called ‘Golden Age’ crime fiction, but with a difference.

Andrew writes books with Agatha Christie as his detective protagonist and Nicol books feature Josephine Tey as her detective. Both authors are of course great fans of the work of their authors turned detectives, and both work hard to stay true to the spirit of the original creators.

So when Andrew writes mysteries for Agatha, he writes about places he knows she has been; journies she has taken as a writer and so he creates the possibility of truth within a fictional landscape. As. Christie was a genius plotter, very skilled at looking behind the surface and intuiting motive, he felt that these were the kind of skills that would have been extremely useful as an intelligence agent between the wars and so has cast her in that role in A Different Kind of Evil.

For Nicola Upson, it was the fact that Josephine Tey took the Golden Age rule book and tore it up that makes her so fascinating – that and the fact that she had a most intriguing personal life. In 1948, in The Franchise Affair, she was writing about two women accused of the kidnapping of a young girl. Quite different from other crime writing of the time. All her books are different and her charCterisation is excellent. Tey was well known as a playwright as well as an author and Upson has spoken to a number of her contemporaries about her, as her friends jealously guarded the privacy she valued so much.In particular she spoke at length to John Gielgud who told her wonderful stories about Tey coming down from Inverness to stay at her club, getting her furs out of storage from DebenhMs and holding court amongst the theatrical great and good. Though Tey had a close personal life, she thinks it is more intriguing to have gaps than knowledge.

Her books explore the magic of the West End Theatre world, but also take place at a time when the death penalty was in force.

Discussion ranged from dealing with literary estates – fortunately there is no copyright on actual people, just their characters to the importance of backstory for characters and why the Golden Age of crime is so popular.
Great discussion, well chaired by Jenny Brown. 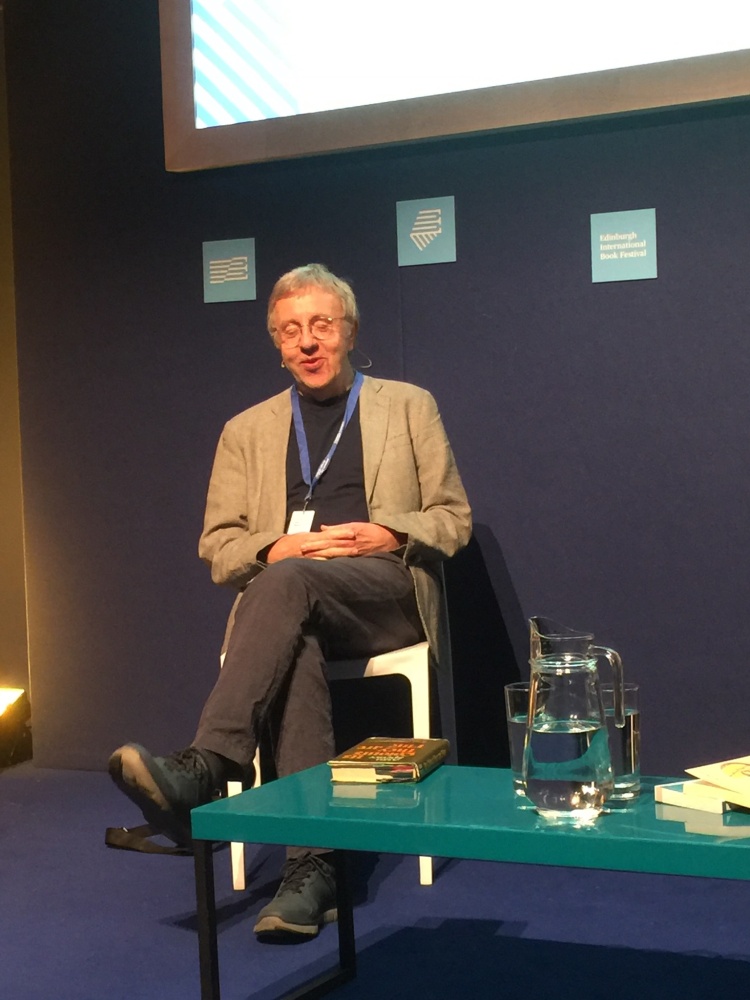 Then I was off to listen to Alan Spence, in conversation with Brian Taylor. Sadly Ron Butlin had to withdraw from this session, but Brian read from some of his early work and thT was much appreciated by the audience.
Alan Spencer’s It’s Colours They Are Fine, was a seminal work in my early literary education when it was published 41 years ago, and so I was thrilled that it has just been reissued by Canongate in a brand new edition. Spence’s celebrated debut collection, first published in 1977, brings Glasgow to vibrant life and captures the spirit of the city as it teetered on the brink of change. From childhood Christmases in small tenement flats and games played on scrubland, to Orange Walks on bright Saturday afternoons and Thursday nights in dark, pulsing dancehalls, these interlinked stories vividly evoke the city and its inhabitants – young and old, Catholic and Protestant, hopeful and disillusioned.

It was one of the first books that spoke to me directly of my childhood and adolescence and it resonates with me still. There is a truth in Spencer’s storytelling that is beautiful. So this was a session to listen and love. And thanks, that’s exactly what I did.

Next up was Adam Kaye, author of the runaway bestseller This Is Going To Hurt. There is nothing like a book festival to show you how ill read you are, and this one is no exception. So I have not read this, but again, I need to. I knew it was funny, everyone tells me so. What I was it prepared for was the hurt, the damage and the anger. 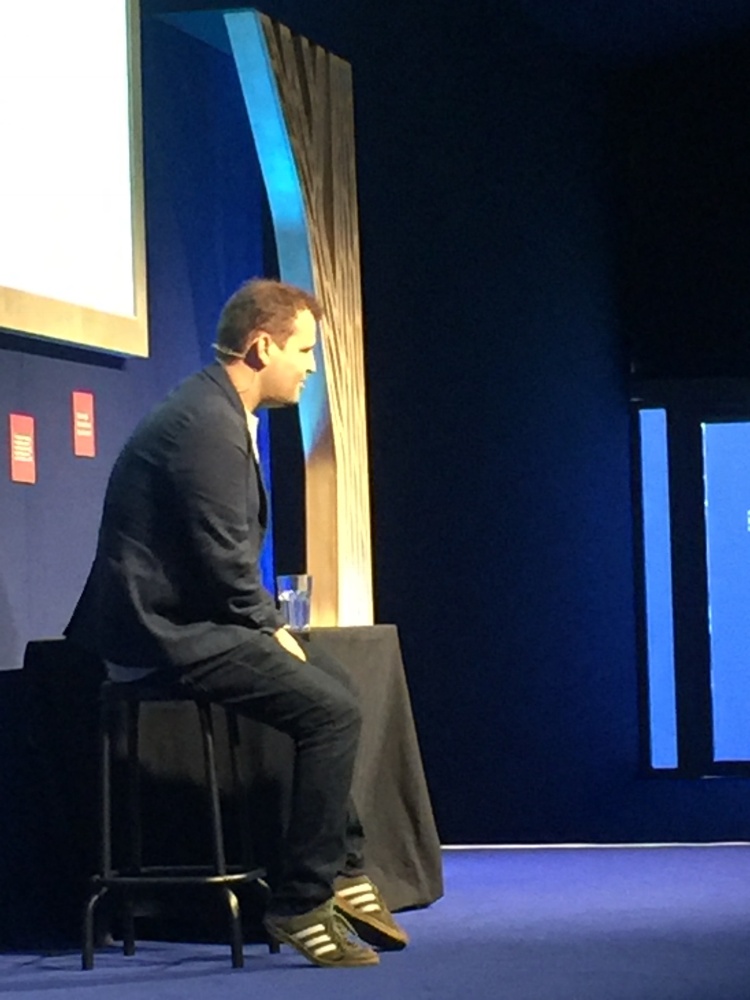 I should have been, if I’d thought about it. After all, as Kaye very clearly and simply outlines, what we ask of all our doctors, and our junior doctors in particular, is nothing short of amazing – and we fail to give them the simplest of psychological and communications skills to help them.

I think what came across to me the most was that whilst, as a society, we expect our medical practitioners to be selfless and caring, we do not often stop to think what a toll this lifestyle takes on those who dertake these roles.

Kaye was indeed very funny and very passionate about his subject.Full of humorous anecdotes and a great storyteller. But he is also a man on a mission. He wants the public to understand what it means to be a junior doctor. His diaries were written between 2005 and 2010 when Kay worked as a junior doctor specialising in obstetrics and gynaecology.

Kay decided to go public with them amid the war of words between health secretary Jeremy Hunt and junior doctors over pay and conditions. Initially, they formed the basis of a one-man show at the Edinburgh festival, but was then commissioned by Picador to turn them into a book.

“The government was promoting the message that the junior doctors were being greedy, which they really weren’t – they were worried about working conditions and patient safety,” he said.

Kay believes that no politician should be put in charge of the Department of Health without spending at least one full shift genuinely working on the hospital front line. He also believes that more needs to be done to consider the mental health of everyone working in the NHS – regardless of what some, older doctors might think about “manning up”.

His book works up up to a career-ending incident that left Kaye traumatised, (my words) fearful and although he was repeatedly told he had done nothing wrong; made no incorrect decisions, that incident was what led him to ditch his chosen career.

It says a lot about us, how we treat those who dedicate their lives to caring for us. It is time we repaid the compliment.

My final panel of the Thursday was the much anticipated sell out show of the Queen of Crime herself, Val McDermid, interviewed by Liam McIlvanney. Primarily talking about her new book, the wonderful new Karen Pirie novel, Broken Ground, Val was on sparkling form.

Val’s seemingly effortless ability to merge multiple cases and weave the threads together comes from her need to reflect some of the reality of dealing with criminal cases. Police and Private Investigators rarely have just one case on their books, so Val works hard at reflecting some of that in her work.

Her books can be years in the gestation process. She will store away the germ of an idea and think about it for quite a long time before she is ready to write it.As she comes to the close of writing one book, she is often thinking about the next one.

In Broken Ground she credits a bookseller with giving her the initial idea for a story but she had also long been fascinated by the notion that at one time the Highlands around Wester Ross and Loch Ewe had been a forbidden area. During the war, access to the Highlands was often restricted and local people and military personnel required special passes to enter the region.

Val also discussed the appeal of cold cases now that there is the ability to se new technology to discover new aspects of historical cases. She takes pleasure in making sure all her characters have a life especially she says, “ giving victims the dignity of a personality and character.”

She is pleased to be on the judging panel for the Man Booker prize this year and says that all the discussions have been very collegial and that by the time the winner is chosen, each book will have been read by each judge 3 times.

Am also touched on her other career as lead vocalist for the crime writer supergroup The Fun Lovin’ Crime Writers- see them at the Book Festival next Thursday in the Spiegeltent, where you can see Val as, in her words, the Debbie Harry of Crime Fiction.

All in all a special, different and fascinating day, made better for bumping into the fabulous Orenda team of Karen Sullivan, Thomas Enger, Lilja Sigurdardottir, and Michael Malone.
More on #TeamOrenda on Friday!