Somebody has been here before us. And he’s still here . . .’

When a body is discovered in the remote depths of the Highlands, DCI Karen Pirie finds herself in the right place at the right time. Unearthed with someone’s long-buried inheritance, the victim seems to belong to the distant past – until new evidence suggests otherwise, and Karen is called in to unravel a case where nothing is as it seems.

It’s not long before an overheard conversation draws Karen into the heart of a different case, however – a shocking crime she thought she’d already prevented. As she inches closer to the twisted truths at the centre of these murders, it becomes clear that she’s dealing with a version of justice terrifyingly different to her own . . .

A new Val McDermid is always a cause for rejoicing and I have especially come to love the Karen Pirie books, with all the strength of character and determination that Pirie has, coupled with the atmospheric descriptions of Edinburgh and, in this case, Wester Ross.

In Broken Ground, Pirie will have to deal with three cases. Set in a duel timeline of 1944 and 2018, with dips into the mid-1990’s, the primary cold case Karen deals with is the discovery of a perfectly preserved body of a man in a peat bog in Wester Ross.

Alice Somerville has travelled to a Highland crofting area to claim the vintage motorbikes her grandfather buried there in a peat bog at the end of the Second World War. But when a body turns up under one of the motorbikes it seems she is to be disappointed.

This body is wearing Air Max Nikes, which puts the case firmly in the jurisdiction of Detective Chief Inspector Karen Pirie, Head of the Historic Cases Unit. Still grieving the loss of her partner, Phil, she isn’t exactly thrilled when her boss, PR conscious Assistant Chief Constable Ann Markie, assigns a new investigator to her unit without discussion. Is Detective Sergeant Gerry McCartney there to help, or is some other motive at work here?

Meanwhile McCartney and Jason ‘The Mint’ Murray are painstakingly tracking down new evidence in a cold case involving several violent rapes. And as if she weren’t already busy enough, Pirie overhears a conversation in her favourite coffee shop, Aleppo, which worries her enough to make an on the spot intervention.

Pirie must follow the trail of a World War II soldier involved in the discreet relocation of 2  vintage motorcycles, Indian 741s,  in order to establish the identity of the murdered man and solve the case. Her need for justice for the victims and closure for the families is what keeps her searching, determined to piece together scraps of old evidence and half-forgotten remembrances and she will let nothing stand in her way.

McDermid is an expert in her craft. She creates a strong and atmospheric sense of place; her characters develop book by book and are well rooted and believable, making the reader care about them and worry for their futures.

Flawlessly plotted, Broken Ground is a masterclass in creating three utterly fascinating interwoven stories and serving up a side dish of personal rancour that could sour a pint of milk. Riven with suspense, full of tension and nail bitingly good, this is a cracker of a book.

This is the fifth Karen Pirie book and she is really coming into her own in a strong and fearless way. She is a good leader, intelligent, fiercely determined and nobody’s idea of a a pushover.There’s a new mantra in town; ‘What would Karen Pirie do?’

Through the character of Karen, McDermid reserves her strongest ire for women who do not hesitate to backstab other women in their race to the top and for those who will let political considerations sway their sense of what is right.  Justice, for some, is seen to be a moveable feast.

As the book comes to a conclusion Karen Pirie has made not just one, but two new enemies, although to be fair, she has also made a new friend. I’ll be fascinated to see what happens in the next book.

Verdict: A flawlessly plotted, gripping page turner you will not want to put down. 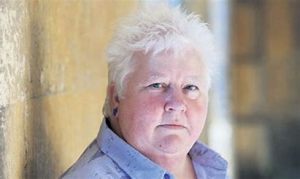 Val McDermid is one of the biggest names in crime writing. Her novels have been translated into 40 languages, sold over 15 million copies worldwide.Val comes from Kirkcaldy, Fife, and read English at St Hilda’s College, Oxford (where she is now an Honorary Fellow). She was the first ever student from a state school in Scotland. Following graduation she became a journalist, and worked briefly as a dramatist.

Her first success as a novelist came with Report for Murder The first Lindsay Gordon Mystery, first published in 1987.

Among her many awards are the Portico Prize for Fiction, the LA Times Book Prize, the Lambda Literary Pioneer Award and the Cartier Diamond Dagger. She has published 27 novels, short stories, non-fiction and a prize-winning children’s book. She is a regular broadcaster for BBC radio and lives in Edinburgh

Val says: “I never imagined when I started on this journey that I would have the success that has come my way. All those novels, radio plays, short stories, non-fiction and even a children’s book make a significant pile that I have every intention of adding to. I divide my year between writing and promoting my work at home and abroad, and when I’m not travelling, I divide my time between South Manchester and Edinburgh where I live with my partner and my son. Most days, I feel like one of the very lucky ones.”