Renowned human rights lawyer Elizabeth Maurier lies dead, her body mutilated, her killer unknown. For DI Olivia Martins and her team, it’s a mystery. For the victim’s daughter Lizzy, a poet and academic with a shaky grasp on reality, it’s a tragedy. But for Sam Williams, the man she fired a decade ago and hasn’t spoken to since, it’s a whole new world of pain.

But Elizabeth’s murder is just the start. As Sam reluctantly digs his way back into the past, more truths will crumble into lies.

More certainties will shade to doubt.

And more innocent people will die.

I was keen to read the second in the Sam Williams series, as I had really enjoyed this unconventional character first unleashed in Hames’ book, Dead North. No-one Will Hear can be comfortably read as a stand-alone as sufficient backstory is given to allow the reader to understand Sam Williams’ state of mind.

No-One Will Hear also offers an insight into the world that Sam Williams used to inhabit; a high earning lawyer who left under something of a cloud. Now his erstwhile boss, Elizabeth Maurier, has been found dead and Wiliams, to his surprise, has been asked to attend the probate session for the will reading.

He soon finds out why he is there. Lizzie Maurier, Elizabeth’s daughter and David Brooks-Powell, his nemesis from the firm have all been charged with writing Elizabeth’s memoirs as a last request. Elizabeth has been murdered, but can her memoirs have any bearing on her untimely death?

The police are not at all helpful. DI Olivia Martins wants to know why Elizabeth was calling Sam in the week leading up to her death, but Sam didn’t take those calls and simply doesn’t know. Martins doesn’t like him and warns him off, but that of course is enough to pique his curiosity. DC Vicki Colman, on the other hand, might be a little green in the job, but she reckons they need Sam’s help to find out more about the victim. They meet clandestinely and Sam hears about the horrific mutilation of Elizabeth’s body together with words written on the wall that say. ‘No one will hear.’

Meanwhile, as Sam tries to delve deeper into the lives of Elizabeth, Lizzzie and Brookes-Powell, he fails to notice that his long suffering girlfriend, Claire, is moving further away from him and has her own problems that Sam just isn’t listening to.

To add to his woes, Sam is now also being pursued by a tabloid hack, who is following him everywhere. Sam begins to think the murder must relate to a case he dealt with when he was with Elizabeth’s firm, but can it be as straightforward as that? Certainly there are some highly placed influencers interested in how this investigation is playing out.

Multi-layered, full of intrigue and with 4 messages and 4 murders to solve, Joel Hames has written another fast paced and intelligent thriller where the clues are unravelled in a series of wholly unexpected twists and turns.

Intense, twisted and gripping this is a novel that builds to a shocking climax as Sam finally untangles all the plot strands from this complex tapestry of violence and corruption.

Characterisation is strong, and there’s a thread of self-deprecating humour throughout, which helps to make Sam all the more a rounded if not always empathetic, character.

Verdict: A strong and intelligent plot led murder mystery with engaging characters and a dark heart. 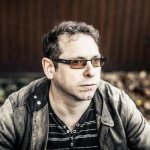 Joel Hames lives in rural Lancashire, England, with his wife and two daughters, where he works hard at looking serious and pretending to be a proper novelist.
After a varied career in London which involved City law firms, a picture frame warehouse, an investment bank and a number of market stalls (he has been known to cry out “Belgian chocolates going cheap over ‘ere” in his sleep), Joel relocated from the Big Smoke to be his own boss. As a result, he now writes what he wants, when he wants to (which by coincidence is when the rest of the family choose to let him).
Joel’s first novel, Bankers Town, was published in 2014, and The Art of Staying Dead followed in 2015. The novellas Brexecution (written and published in the space of ten days following the UK’s Brexit referendum, with half of the profits going to charity) and Victims were published in 2016 and 2017 respectively.

Joel’s website can be found at http://www.joelhamesauthor.com/, where you can find out more about the writer and the books, and sign up to his email newsletter. If you want to know what Joel has planned for the future, what he thinks right now, or just stalk him a little, you can find him on Facebook at facebook.com/joelhamesauthor or Twitter at @joel_hames. Joel has never seen the word “Joel” appear as frequently as it does right here, and wholeheartedly approves.

You can find out more about Joel and read others views by following the blog tour here: 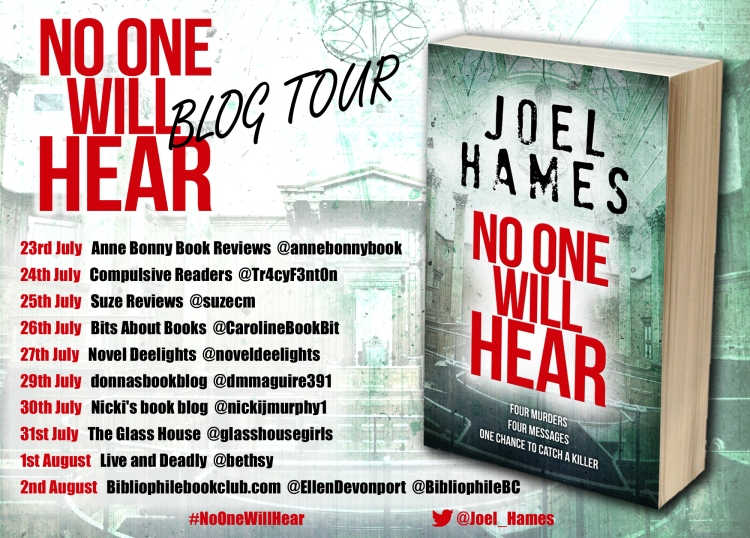