Haunted by a failed undercover mission, Rose is finding it hard to shake the memories of her close encounter with a ruthless serial killer – one who is still free, and could strike again without warning.

The call to investigate a suspected arson attack that’s left a man dead is a welcome distraction. It’s not the kind of case usually assigned to the FBI, but nothing about this crime is usual. As Rose digs deeper, she finds herself confronting the sort of imagination her son might see in the fantasy worlds of his video games.

But when your opponent is a killer, nothing feels like a game. . .

On the face of it, this is a perfectly straightforward FBI serial killer thriller. Rose Blake is a dedicated FBI agent who is struggling to come to terms with her previous case in which she had managed to trap the very creepy serial killer Shane Koenig, only for him to get away, wounding her partner Owen in the process and relegating him to more of a desk job. She’s lost some of her confidence and to add to her woes, her husband Jeff is a Social Media manager for a high profile politician in the Senate elections and even when he’s home, he seems distant. Rose’s son Robbie is slightly on the spectrum and is failing at some of his classwork. Rose worries that both the men in her life are now so technology dependent that they can’t lift their heads for long enough to enjoy the world around them.

The one evening Rose is called out to attend a scene where a body has been discovered in the midst of a fire. The condition of the body is horrific, yet there is no obvious clue as to what has happened. It has to be murder, the injuries are so gruesome, but the M.O. here is one she has not encountered before.

There are similarities to the kind of killings that Shane Koenig enjoys, yet startling differences too. When a further two bodies turn up having died in similarly gruesome circumstances it becomes clear that what they have in common is a connection to Skin, a VR suit just about to come onto the gaming market.  Skin is a totally immersive online experience from software giants Wadesoft in which “the person wearing the suit can be made to feel the physical sensations of whatever software simulation the program is running.” Once the user enhances his body by wearing the skin he can enter the Streamplex where all his needs and wants can be realised in a virtual environment. So, a bit like Second Life, only with physical as well as mental stimulation.

So now our FBI serial killer thriller has entered a new arena and Rose will soon be faced with some very difficult decisions as everything she knows is put a risk by a violent and unusual killer.

What’s utterly fascinating about this book is that it is set almost in the present. Nothing that is discussed in technology terms feels implausible or far-fetched. Highlighting our dependence on technology, Scarrow and Francis have created a scenario that is both chilling and all too believable.

Though I found some of the writing to be a bit clunky early on in the book, the narrative soon picked up pace and as the themes started to emerge I was quickly caught up in the fast paced action and the inevitable consequences of the actions of some pretty dumb-assed guys.

Indeed, one of the things I liked about this book was the strong sense of female kick back in the book which creates both a tension and a solution; even if in doing so it highlights some pretty stark moral dilemmas.

The thread of technology at the core of the book is also very thought provoking. The danger inherent in the Internet of Things where a network, a system, a computer are so easily hacked, and because everything is interconnected and tied in to social media, personal data is at once highly vulnerable and easy to manipulate.

Scarrow and Francis have latched onto something very interesting here. I’ll be fascinated to see how it develops.

About Simon Scarrow and Lee Francis 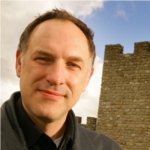 A regular on the Sunday Times bestseller list with his historical novels, Simon Scarrow launches an exciting new strand to his writing with PLAYING WITH DEATH, written with Lee Francis: both an edge-of-your-seat thriller and a terrifying exploration of the dangers of the modern world.

Simon’s Eagles of the Empire novels are legendary among readers of historical fiction, and all his novels, have been acclaimed by reviewers and readers alike. Prior to writing fiction Simon worked as a teacher and lecturer; he is now a full-time writer.

Lee Francis worked for several years in the world of film, TV and advertising as a script reader and assistant director. PLAYING WITH DEATH, written with his former lecturer Simon Scarrow, is his first novel.

See what others are saying. Follow the blog tour.