Play with fire and you get burned…

In the crippling heat of August in Rome, a flat goes up in flames, the doors sealed from the outside. Five illegal immigrants are trapped and burnt alive – their charred bodies barely distinguishable amidst the debris.

One man cut into pieces.

When Detective Inspectors Rossi and Carrara begin to investigate, a terror organisation shakes the city to its foundations. Then a priest is found murdered and mutilated post-mortem – his injuries almost satanic in their ferocity.

One city on the edge of ruin.

Rome is hurtling towards disaster. A horrifying pattern of violence is beginning to emerge, with a ruthless killer overseeing its design. But can Rossi and Carrara stop him before all those in his path are reduced to ashes.

I haven’t read the first book in the Michael Rossi series, though I will now do so. That wasn’t a major barrier to my enjoyment of A Cold Flame, though there are references to the first book which leads me to recommend that you read it first.

Nowhere does politics, whether internal, external or religious quite like Italy.  A Cold Flame reflects a country and its people that are reeling from an unstable political situation, the refugee crisis, geo politics, terrorist threats and police corruption.

All this is taking place in Rome in a heatwave that burns the soles of shoes as they touch the pavements.

Five men are found after being burned alive.  They were illegal immigrants living quietly in their flat but horrifyingly, the doors were locked and windows barred to prevent escape and ensure total immolation.

The cerebral DI Michael Rossi and his partner DI Gigi Carrara must find a way to navigate internal Police politics and appease their bosses, whilst finding the way through a plethora of fragments of information in order to piece together the answers they need.

A second fire, in a more well to do area, has also targeted a family of Nigerian asylum seekers, though fortunately no-one is hurt this time. Is this individual racist action or a more focussed series of terrorist attacks?

Then a pipe bomb goes off by the Israeli University and the city is on high alert.  Rossi and Carrara must find out who is terrorising the city and why. As Rome burns the detectives must not fiddle around in their quest to stop a mass murder in the heart of the Eternal City.

Utilising a series of narrative arcs, Conway cleverly weaves together individual stories into a complex and chilling plot.  With the help of a journalist, Dario Iannelli, under protection and in hiding after threats to his life from the previous case, Rossi slowly begins the job of piecing together the small pieces of a complex puzzle to find his perpetrator/s.

I really enjoyed this engrossing plot which offered a good insight into each character and their personal lives at the same time as bringing together a welter of seemingly unconnected events each of which carries the smallest of clues for Rossi to uncover. Navigating the delicate path of corruption and influence inside the police in order to proceed as they need to is a delicate task and the duo have to tread lightly to get away with some of their techniques. But that is essential if he is to prove what he fears and believes – that there is an unholy alliance behind what has been happening in the city, and a conspiracy to keep it under wraps.

A Cold Flame is not a short book, but it is written in bite sized chapters and the pacing is just right for such a highly charged plot involving a number of socio-political strands. It does dip a bit in the middle, but soon picks up again.

Conway brilliantly brings Rome and its dark forces to life amidst some very brutal crimes.

Verdict: Atmospheric, intelligent and gritty, this is a series I will  certainly be following from now on. 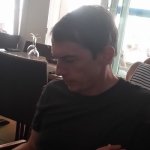 Aidan Conway was born in Birmingham to Irish parents and has been living in Italy since 2001. He holds an MA in Irish Writing from Queen’s University Belfast and has been a bookseller, a proofreader, a language consultant, as well as a freelance teacher, translator, and editor for the United Nations FAO. He is currently an assistant university lecturer in Rome, where he lives with his family. A Cold Flame is his second novel.

Find out more about Aidan Conway and his books on his website.

See what others are saying, follow the blog tour here: 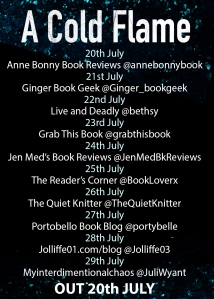