It is the 1970s and Ralph, an up-and-coming composer, is visiting Edmund Greenslay at his riverside home in Putney to discuss a collaboration. Through the house’s colourful rooms and unruly garden flits nine-year-old Daphne – dark, teasing, slippery as mercury, more sprite than boy or girl. From the moment their worlds collide, Ralph is consumed by an obsession to make Daphne his. But Ralph is twenty-five and Daphne is only a child, and even in the bohemian abandon of 1970s London their fast-burgeoning relationship must be kept a secret. It is not until years later that Daphne is forced to confront the truth of her own childhood – and an act of violence that has lain hidden for decades. Putney is a bold, thought-provoking novel about the moral lines we tread, the stories we tell ourselves and the memories that play themselves out again and again, like snatches of song.

Cards on the table. This is a novel about child sex abuse. I was less than sure I would be able to read this book, far less wax lyrical about the writing, but it is so beautifully drawn and so carefully laid out that I found myself completely drawn in by it and having to examine my own judgemental feelings as I went along.

I’d say this is a story of historical sex abuse, except that for Daphne, now approaching 50, this is her life and has been since she was 9 years old.

Daphne Greenslay is the daughter of a 1970’s bohemian couple. Edmund, her father, is an affluent writer and her mother Ellie is involved in radical Greek politics. Their house in Putney is a whirlwind of laughter, drinking, and endless debate with friends and has a general liberal aura of permissiveness, not uncommon at the time in the artistic and political classes.

Ralph is a composer of avant-garde music and becomes part of the inner circle of friends when he takes on the score for a play for one of Edmund’s books.  At 29, he is a hedonist, revelling in the closeness and companionship; enjoying the permissiveness of their society.

Ralph is captivated by wild child Daphne, a slightly feral 9 year old child whose parents love her, but to all intents and purposes fail to actually parent her. Daphne and her brother Theo are pretty much left to their own devices during these heady days and nights and she and Ralph slowly develop a friendship based on warm words, secret presents and a delight in each other’s company. Together they are the outsiders who develop a ‘special’ friendship, hidden from almost everyone else.

For Daphne this is love, belonging and adoration. For Ralph it is pure, unalloyed romanticism and he revels in her naivety and her enthusiasm for him.

Told both in both the present day and in memory flashbacks to the 70’s Putney has three voices, that of Daphne, Ralph and Daphne’s friend, Jane Fish. This is a carefully told story in which we learn about their relationship and its ultimate consummation in Greece when Daphne is 13 years old.

Now Daphne has a failed marriage behind her. She is a recovering addict and has a young daughter, Libby. Recently returned to South West London, their new home overlooks the river where on the opposite bank she can see the house she grew up in and that brings back all her memories of those years which she tends to look on nostalgically.

Ralph is now dying of cancer, married to Nina and with a family of his own.

When Daphne receives a request to meet up again with her old friend Jane Fish, this becomes a turning point for all of them, because Jane has an agenda of her own that she is determined to pursue.

It’s quite difficult to express how carefully this story is treated. But it is immensely thought provoking and in turn had me horrified, questioning myself, questioning the motives of others and the prose treads a delicate path between truth and narcissism; love and abuse.

All too relevant for the ‘me too’ generation, this is a book that ultimately pulls no punches, but leaves you questioning the chiaroscuro between action and motive. 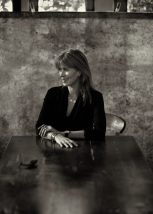 Sofka studied social anthropology at Cambridge and carried out the research for her PhD in Greece. This marked the beginning of a lifelong involvement with the country.

She has lived in Moscow and Rome and worked as a freelance journalist and reviewer, writing mainly for British publications including The Telegraph Magazine, The Times Literary Supplement, The Financial Times, The Spectator, The Independent Magazine and The London Magazine.

After many years in Athens, she now divides her time between there and England. She is married and has two daughters.