Finn Garvie’s life is one spectacular mess. He spends most of his time fannying around a makeshift Glasgow studio, failing to paint his degree portfolio, while his girlfriend Lizzi treats him like one of her psychology patients, and his best friend Rob is convinced that the tattoos he designs are the height of artistic achievement.

To top it all, Finn is worried that some stinking bastard is hanging around, spying on him, laughing at his cock-ups and eating his leftover curry. Fortunately, he has plenty of techniques to distract him – tackling the church hall renovations with the help of his alcoholic neighbour; pining after Kassia, the splendidly stroppy au-pair; and re-reading that book on Caravaggio, his all-time hero.

Things take a turn for the strange when he finally encounters the person who’s been bugging him, and it seems to be none other than Caravaggio himself…

Art, truth and madness come to blows in this darkly funny debut novel from a startling new talent.

It’s hard to know quite where to begin with a literary fiction novel which has the delicious sub heading of Caravaggio in Glasgow: a tale of art, insanity and Irn-Bru. Actually, that sums it up pretty well. Perhaps I’ll just say that I really enjoyed it and leave it there?

Well, not quite. Finn Garvie is our protagonist and as the novel opens he is arsing around in his makeshift artist’s studio, contemplating the devastating art school fire of 2014 and finding that even in the midst of restoration the Mack building was too pitiful to look at. How sad he would be now to learn of its second demise in 4 years and the likelihood that never again will artists aspire to create in the sheer brilliance of the surroundings that were Glasgow School of Art. But back to the novel.

Finn Garvie is having problems getting his portfolio together for his final year degree show. He’s just failed his essay because his tutor doesn’t understand him. For years Finn has traded on his rep for being the archetypal misunderstood artist, but now his muse has vanished and he looks to be only too well understood and with very little in his portfolio to show for it. Nothing he does inspires him; he is at a loss to know how to cope.

There are not many people in Finn’s life. He views his supportive mother (and his financial backer) as a social climber. His girlfriend Lizzie loves him but doesn’t know what he wants from her. His best friend Rob is a tattoo artist and it does his head in that Rob considers his tattoos (hand drawn from original concepts) to be art.

His neighbour Maurice, a diabetic with a liking for the drink, gets beaten up so often by his wife he deludes himself into thinking it’s because she cares. Other characters, like the methodone taking Tuesday McLaughlin and Maurice’s nephew Midge flow throughout the book in sub plots that merge together for one final downpour.

Finn’s only source of solace and inspiration to date comes from his study of Caravaggio, an artist whose extremely colourful life leads Finn to regard him as both a maverick genius and an artist who successfully subverted the social order. In truth, it feels like Finn is well and truly up his own arse with sympathy for himself, but then he’s not meant to be entirely likeable.

What he is though, is very funny, sharp tongued and very definitely Glaswegian. As Finn continues to despair, Caravaggio comes calling. Caravaggio (call me Vadge) is in Purgatory and part of his punishment is to spend time with Finn. Like a marauding Toby Belch with a foul mouth and even fouler temper, he sets about complicating Finn’s life in ways he could never have imagined. But he also serves as the inspiration for a new set of paintings re-interpreting Caravaggio’s work that infuse Finn with enthusiasm.

This enthusiasm leads him to isolate himself from Lizzie and Rob and he becomes obsessed with painting Kassia, an au pair. As Finn’s art begins to mirror Caravaggio’s, so his life also begins to take a darker and more unpredictable turn.

What makes this novel work is the irreverence and humour that prevails throughout the book, even in times of death and crisis. The banter, the patter are pure Glaswegian and the prose is what makes these characters feel very real and remarkably non-patronising.

The character of Caravaggio in the heart of Glasgow is a bit of genius, mirroring as it does the inconsistencies at the heart of the city of Glasgow. The hard man reputation of both struggling with the desire to be the artistic apotheosis is inescapable.

There’s a great deal to like and laugh about in this debut novel, though in the end it is actually rather a sad book, but there’s no doubt that Helen Taylor has an extremely promising writing career ahead. I do think the book is over-long and would benefit from some judicious editing, but I loved her characters, the dialogue and the utterly brilliant concept.

I loved too that the book is wrapped in Timorous Beasties fabulous Glasgow toile wallpaper; the two are made for each other.

Verdict: A terrific concept where the execution will make you laugh out loud. Highly recommended. 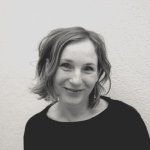 Helen’s career to date has been somewhat eclectic, spanning the highs and lows of

Helen probably knows more than is healthy about the malaria parasite but can’t tell her left from my right, and has the singing voice of a tortured cat which somewhat thwarted her ambitions to be a rock star surgeon. Recently she added a collection of creative writing qualifications to her CV to indulge her passion for writing and feed her craving for academia, and which had the happy consequence of finally making her take her writing seriously.

Want to read more about The Backstreets of Purgatory? Follow the blog tour here: 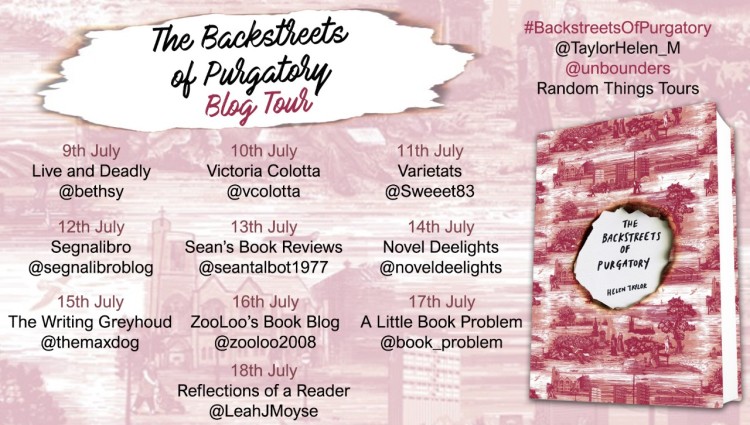