Tristan Griffin is a household name and the author of a universally popular detective series. For the past few years he has lived in self-exile in a remote jungle lodge nestled in the Mayan hills of Southern Belize, with his partner Hedda. The novel begins as he attempts suicide and Hedda disappears. Altamont Stanbury, an old Kriol police constable posted to the local backwater of San Antonio, rushes to the scene with his daughter Philomena, the village nurse.

Philomena saves Tristan but he remains unconscious. Altamont, a bumbler and long-time reader of crime novels, launches a half-hearted search for Hedda by radio but decides to remain at the lodge. In truth his reverence for Tristan the writer consumes all else, and he becomes obsessed with the Griffin books he finds at the lodge.

When Tristan comes to, he is distraught and at times delirious, haunted by flashbacks of his uncompromising, cursed love for Hedda and the dark secret behind her disappearance. His anger and increasingly erratic behavior only find respite in the presence of Altamont’s innocent daughter. But he feels nothing but spite for Altamont himself, and the relationship between the two threatens to have fatal consequences for one or both.

The Butterfly Ranch is a real gem of a find. A treasure trove of atmospheric setting, strange characters and some pretty spot on writing that draws you right in to the heart of the book.

Altamont Stanbury is a Kriol police constable in the small backwater of San Antonio, in the Mayan jungle, where nothing much ever really happens. He spends his days locked in his office, reading and sometimes re-reading detective novels. When he re-reads them he looks for clues he had missed first time round and spends a lot of thought on working out how to detect these crimes efficiently. Locked in his drawer he has a pistol he has never used; a pistol that recently replaced the last pistol he never used.

Surrounded by cacao plantations farmed by Mopan Mayan farmers and the rainforests of Belize, the air is full of the sound of birds, insects and animals and the vegetation in the forests fills the warm damp air with both signs of life and rotten decay.

Altamont and his wife Dee moved from the coastal town of Punto Gorda in the expectation that this was a path to Altamont’s promotion, but that never materialised. Their youngest daughter, Philomena is training to be a nurse and already is the unofficial medic in the area. Altamont and his daughter have an interesting relationship. He calls her Miss and she calls him Sir, but of the two, it turns out to be Philomena who has the stronger authority. Where he is bumbling and somewhat comical, she is intelligent and assured, it is clear that she respects him, but she also has a will of her own.

Things in San Antonio change one day when out of the forest a gas delivery man comes to report a dead body of a ‘Britisher’ up at the peak of the mountain at Butterfly Ranch. The British couple who live at the ranch are known to the villagers, this is where they buy their supplies, but otherwise they stay in splendid isolation; keeping entirely to themselves, save for a local woman, Emiliana Cho, who travels up to housekeep for them 3 days a week.

Tristan Griffin and his partner Hedda live off the proceeds of Tristan’s respectably known detective novels, but not much more is known about the couple. What we come to learn of them is told in flashbacks and from the recollections of Hedda’s twin sister, Grethe Johansen.

When Altamont and his daughter Philomena arrive at the ranch they discover Tristan Griffin, not dead, but lying on the floor after taking an overdose of diazepam. There is no trace of Hedda anywhere. With Tristan too ill to be moved, Altamont and Philomena have no choice but to stay at the ranch and hope that Philomena’s nursing will be able to get him fit to travel.

Altamont uses the radio to ask the police station to get word out that Hedda is missing, but eventually all that comes back is word that Hedda’s sister, Grethe, is on her way to them from her home in Norway, but there is no trace of Hedda anywhere.

In the midst of what is about to become a hurricane, this is a highly charged atmosphere in which four people are stranded in a house with time to reflect on what may have happened and for the reader to understand the relationship between Tristan and Hedda.

For this is in many ways an anthem to doomed love. Amidst the heat and the heavy atmosphere, these two have countenanced no others, yet it has made neither of them truly happy. As we learn more of their relationship, it becomes clear that this was always going to be a traumatic pairing, albeit one with real depth and passion.

A story of love, pain, loss and tragedy, this novel is both dramatic and almost operatic in its setting and plot line. In fact, it would make a fine opera, requiring only a sparse libretto with lots of bass and drums, thunder and lightning.

The writing is really very good and though you can’t honestly say that any of the characters are likeable, save perhaps for Philomena, they certainly stand out as real people.

Verdict: a fascinating read and writing that pulls you in. 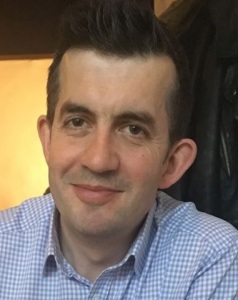 RK Salters grew up in Paris in the 1970s to an Irish émigré father and French mother. He is himself an exile of sorts, having left the roost to study abroad and subsequently lived in a number of countries. His approach to writing is eclectic, drawing influences from classic and contemporary, genre and literary fiction alike, across both sides of the Atlantic.

He is now settled in Lithuania (Baltics), where he earlier met his future wife while exploring the collapsing Soviet Union. He is a passionate traveller and an expedition in Belizean jungles provided the setting for Butterfly Ranch, his first novel.