Sometimes perfection is worth killing for…

Each murder brings him one step closer to the perfect death.

Ex-priest DI Farrell is called on to investigate gruesome death in rural Scotland. All evidence points to suicide, except for one loose end: every light in the cottage was switched off. Why would he kill himself in the dark?

The question sparks a murder investigation that leads to the mysterious Ivy House, home of ‘The Collective’, a sinister commune of artists who will do anything to keep their twisted secrets hidden.

And when the remains of a young girl are uncovered on a barren stretch of coastline, Farrell realises that there is something rotten in this tight-knit community. Now he must track down a ruthless killer before another person dies, this time much closer to home…

I’m really pleased to be on the blog tour for Perfect Dead because I’m Frank Farrell fan. I loved Dead Man’s Prayer because the character of Frank, the former priest turned Police Detective, is so good and Jackie Baldwin brilliantly conveys the inner tension between his spiritual and vocational pull and his more secular existence as a policeman.

Flawed policemen are of course nothing new, but this unique character twist gives Baldwin the opportunity to exploit her protagonist’s inner tension and stretch his mental health without compromising his moral integrity.

In Perfect Dead Farrell and his bright and sparky D.C. Mhairi McLeod are called to a death in Kirkcudbright where it appears that Monro Stevenson, an artist, has shot himself. But Farrell’s gut tells him that something just doesn’t feel right and the fact that the death appears to have occurred in the dark and there seems to be a glass missing suggests that Farrell’s instinct is once again spot on.

But a suspicious death is not the only case that the Dumfries MIT has to deal with. DCI Lind, one of Farrell’s oldest friends as well as his boss has a major forgery case going on which D.I. Kate Moore is spearheading and Farrell’s inkling that his suicide may be a suspicious death isn’t putting Superintendent Walker in a sparkling mood, either. So their team is stretched as far as it can be and when the murder is confirmed and is then closely followed by another, the investigation leads Farrell to Ivy House, a somewhat decaying mansion which houses a libertarian group of artists.

Monro Stevenson had once been part of the self-styled ‘Collective’, but Farrell’s suspicions about this group of ageing hippies is exacerbated when the remains of Ailish Kerrigan are found on a nearby Firing Range. Ailish was last seen several years ago leaving Ivy House where she had been having a relationship with one of the artists.

What makes this book really work for me is in the three dimensional characters that you really feel you are getting to know. We learn more about Mhairi McLeod and her new relationship; we are given insights into the difficulties D.C.I. Lind is facing and of course we learn more about the tortured soul that is Frank Farrell. Cleverly weaving the personal and the professional together is a talent that Baldwin has mastered.

This all happens alongside a multi-layered and cleverly executed plot with lashings of mystery, a good helping of tension and some neat misdirects thrown in for good measure. The pace is excellent and the plot twists and turns until the surprising denouement.

Jackie Baldwin is an exciting addition to the Scottish crime writing family and I look forward to more of Frank and Mhairi for some time to come. 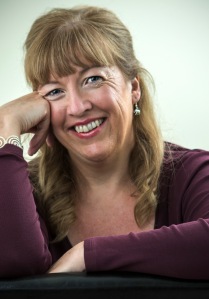 Jackie Baldwin is a Scottish crime writer. Her debut crime novel, Dead Man’s Prayer, was published by Killer Reads, Harper Collins on 2nd September 2016. The second in the series, Perfect Dead was published on 15th June 2018. For most of her working life, she has been a solicitor specialising in Family and Criminal Law. However, she now practices in Dumfries as a hypnotherapist which is where her novels are set. Married, with two grown up children, she has filled her empty nest with Golden Retrievers. She can often be found in a forest walking the dogs, covered in mud and with twigs in her hair.

See what others are saying about Perfect Dead. Follow the blogtour here: