Can a broken town survive a second tragedy? The follow-up to the international bestseller Beartown.

Tucked in a forest in the frozen north, Beartown’s residents are tough and hardworking. They don’t expect life to be easy, but they do expect it to be fair.

Which is why the sudden loss of their hockey players to the rival town of Hed hurts. Everyone needs something to cheer for in the long winter nights. Now they have nothing.

So when a new star player arrives, Coach Peter sees an opportunity to rebuild the team – to take on Hed and restore Beartown’s fortunes. But not everyone in town sees it his way.

As the big game between both towns approaches, the rivalry turns bitter and all too real. Once the stands rumbled with threats to ‘kill’ and ‘ruin’ each other, but the residents didn’t mean it. Now they do.

By the time the last goal is scored, someone in Beartown will be dead . . .

Us Against You is the story of two towns, two teams and what it means to believe in something bigger than yourself. It’s about how people come together – sometimes in anger, often in sorrow, but also through love. And how, when we stand together, we can bring a town back to life.

Did you read Beartown? Perhaps you read it in the brief period when it was called The Scandal? If not, stop here and go and read it now, because whilst you certainly can read Us Against You as a stand-alone, you will get so much more from it if you have read its predecessor.

These are books that soar above the crowd; novels that examine societal behaviour by tackling the big issues and putting them into small town life. If that sounds grandiose, it isn’t. Backman shows us humanity in all its forms; makes us laugh and cry, creates characters who can at once be divisive and healing and shows us how easily manipulation can make puppets of us all.

I adored Beartown and I loved Us Against You just as much. Backman’s writing is as smooth as silk and his narrative arcs are perfectly formed jewels. He has this trick of telling us at the beginning of the chapter what is going to happen, yet by the end of that chapter we are left astonished that it has.

If I am babbling, it’s because I have just finished this book and I want to tell the world how passionate I am about it.

After the deeply shocking and traumatic events that left Beartown shaken to its core, Us Against You returns to the town to consider the aftermath. The repercussions have been severe. Money has leeched away from the Beartown Hockey Club, a key player is now playing with the opposition team in Hed, and the spirit of the club has deteriorated until it is hardly worthwhile saving it.

In a town where jobs are scarce – and about to get scarcer- this is tantamount to writing off the people who live there forever. Yet, in the midst of a depressing scenario and where the repressed violence triggered by the events around the general manager’s daughter is just barely keeping below the surface, there is one man who sees how to use all of this to his personal advantage.

We watch in astonishment as this puppet master first saves the hockey team and then manipulates all around him so that his fingerprints are never quite on the gun, yet it is he who has made all the bullets. He is the one standing behind the town’s main players ensuring that disharmony will creep in; those ears instinctively fastening on the susurrus that will lead to their own downfall.

Backman has a love and respect for his characters that shines through on the page, whether they are at the time engaged in good or bad acts. He documents the wins and the losses on a sporting level whilst underling the personal cost to the town’s people.

Using gender and sexuality to make his case, he gently leads us through the gamut of emotions from despair to hope; from tears to joy and back again. He does that by using an almost Garrison Keillor like homespun narrative, except this is much sharper and more pointed. Instead of just showing us  events, Backman takes us into the hearts and souls of his characters and makes them very real for us as he displays for us all their prejudices, their closest secrets and the lies they tell themselves and makes us love them just the same.

Intense, propulsive, shocking and teetering throughout on the verge of violence, this is a book that stirred all my emotions as the suspense mounted and the story took on a life of its own.

If you read nothing else, read this. 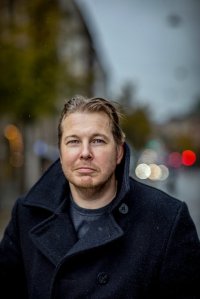 Born in June 1981, Fredrik Backman is the #1 New York Times bestselling author of A Man Called Ove, My Grandmother Asked Me to Tell You She’s Sorry, Britt-Marie Was Here, Beartown, as well as a novella, And Every Morning the Way Home Gets Longer and Longer. Fredrik Backman, Swedish author, journalist, and blogger, was voted Sweden’s most successful author in 2013.

Backman grew up in Helsingborg, studied comparative religion but dropped out and became a truck driver instead. When the free newspaper Xtra was launched in 2006, the owner reached out to Backman, then still a truck driver, to write for the paper. After a test article, he continued to write columns for Xtra.

In spring 2007, he began writing for Moore Magazine in Stockholm, a year-and-a-half later he began freelancing, and in 2012 he became a writer for the Metro.His books are published in more than thirty-five countries. He lives in Stockholm, Sweden, with his wife and two children.

Book Reviewer, Avid Reader and Bookworm. Campaigning to link more readers to writers. People do not forget books that touch them or excite them—they recommend them.