Take a card. The price is your soul.

Welcome to the City of Sin, where secrets hide in every shadow.

Enne Salta was raised as a proper young lady, and no lady would willingly visit New Reynes, the so-called City of Sin. But when her mother goes missing, Enne must leave her finishing school—and her reputation—behind to follow her mother’s trail to the city where no one survives unchanged.

Frightened and alone, her only lead is a name: Levi Glaisyer. Unfortunately, Levi is not the gentleman she expected—he’s a street lord and con man. Levi is also only one payment away from cleaning up a rapidly unraveling investment scam, so he doesn’t have time to investigate a woman leading a dangerous double life. Enne’s offer of compensation, however, could be the solution to all his problems.

Their search for clues leads them through glamorous casinos, cabarets and into the clutches of a ruthless society. As Enne unearths an impossible secret about her family, Levi’s enemies catch up to them, ensnaring him in a vicious execution game where the players always lose. To save him, Enne will need to surrender herself to the city…

And she’ll need to play the game.

I am very excited to bring an extract from Amanda Foody’s magical new young adult novel to my blog today.

If I’m not home in two months, I’m dead.
Her mother’s warning haunted her as Enne Salta lugged her leather trunk down the bridge leading off the ship, filling her with an inescapable sense of dread.
If I’m not home in two months, I’m dead.
It’d been four.
For the first time in fifteen days, Enne stepped onto dry land. Her balance veered from side to side as if she expected the gray cobblestones to tilt like the sea, and she white-knuckled the pier’s railing to compose herself. If the ground weren’t so littered with cigar butts and grime, she might’ve kissed it. Two weeks battling seasickness on a floating monstrosity could do that to a lady.

A woman shoved past her, not noticing Enne’s petite frame. The force of it nearly knocked Enne over. She glared at the woman’s ostentatiously feathered hat as it disappeared into the crowds.

Hmph, she thought. A lady shouldn’t rush. Barely five seconds in the so-called City of Sin and already people were rude.
As more passengers disembarked the ship, the crowds around the customs tables swelled with hundreds of people, hollering and waving passports and jostling each other in an effort to reach the front of the lines. Most were young men, probably visiting New Reynes to sample its famous casinos and nightlife—but the number of families present surprised her. This city was no place for children. And, she reminded herself, staring up at the sinister, smog-stained sky, it was no place for her, either.

As Enne joined the queues, she dug through her belongings for her tourist documents. Her purse was stuffed: her passport, a handful of gingersnap cookies leftover from last night’s dinner and a copy of The City of Sin: Where to Go and Where Not To. As she fished out her papers, something fell and clinked when it hit the ground. Her token.

She scooped it up and clutched it to her chest. Her mother, Lourdes, had given her this token. It was two inches long and gilded, with an old Faith symbol of an eye etched on one side and a cameo of a past queen on the other. The Mizer kings had used these tokens as party invitations. It was probably illegal to own it—any remnants from before the Revolution twenty-five years ago had been destroyed, just like the Mizers themselves. But Enne couldn’t bring herself to throw away something so rare and precious. She tucked it safely back into her pocket.

With nothing to do but wait, Enne pulled out her guidebook and compared its cover to the city in front of her. The photograph of Luckluster Casino matched the stories of New Reynes: red lights that flashed without flame, women of loose morals dancing on street corners in sparkling, skin- tight corsets, gambling dens beckoning passersby with seedy smiles and the allure of fast fortune. But neither the stories nor the cover bore any resemblance to the city before her. From what she could see, New Reynes was a wasteland of metal and white stone. The factories in the distance glinted as if coated in liquid steel, and the clouds were so black, she swore the rain would fall dark as coal.

Panic seized her as she examined the skyline—white and jagged as teeth. All you know are stories, Enne told herself. And not all stories are true.

Amanda Foody has always considered imagination to be our best attempt at magic. After spending her childhood longing to attend Hogwarts, she now loves to write about immersive settings and characters grappling with insurmountable destinies. She holds a Masters in Accountancy from Villanova University, and a Bachelors of Arts in English Literature from the College of William and Mary. Currently, she works as a tax accountant in Philadelphia, PA, surrounded by her many siblings and many books.

See what others are saying by following the blogtour. 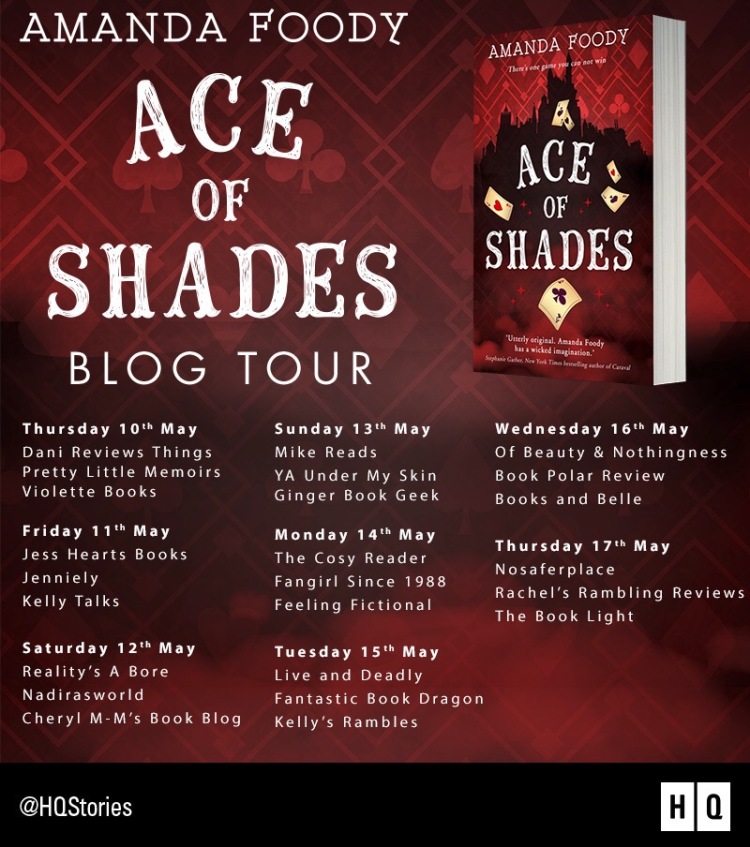