TOO SOON TO SEE

TOO LATE TO HIDE

DCS Frankie Sheehan is handed the case, and almost immediately spots foul play. Sheehan, a trained profiler, is seeking a murderer with a talent for death.

TOO CLOSE TO BREATHE

As Frankie strives to paint a picture of the killer, and their victim, she starts to sense they are part of a larger, darker canvas, on which the lines between the two blur.

I loved the protagonist in Olivia Kiernan’s debut novel. Detective Chief Superintendent Frankie Sheehan in Dublin’s Gardaí is a brave woman in all senses of the word. Physically brave, as she returns to work after nearly dying from a knife attack which left her scarred physically and mentally. Morally brave, because when it comes down to it, she has the courage to admit when she is wrong and to act accordingly.

So when Dr Eleanor Costello, scientist and academic, is found dead in her home, Frankie is assigned the case – her first since her return to work. Now she needs to get into the case while managing her team and ensuring that what they have to give her is borne from respect and not pity.

Though Dr Costello has been found hanging, Frankie is not convinced that it is a suicide and when the pathologist confirms that it is a murder Frankie and her team begin an investigation which will lead them into hidden and terrifying places, and more than one dead body will be left in the murderer’s wake.

Frankie is a great character. She gets on well with and is respected by her team and her boss, Jack Clancy, and she is not afraid to take responsibility when things go wrong or when she knows that her actions will push the already stretched investigations budget through the roof. All she wants is to get the job done and bring justice to the victims. Headstrong despite her recent near death experience, she is the first to put herself in harm’s way and she is a bloody good detective.

She also has a great partner who is just the right foil for her. Detective Baz Harwood may have a big ego, but he shares her desire for justice and he is perhaps a slightly more nuanced cop, filling in the lines where Frankie is more big, bold strokes.  But when the serial killer strikes a bit too close to home for comfort, can Frankie put aside her loyalties and get to the truth?

Olivia Kiernan is an Irish writer living in the UK and author
of crime thriller, Too Close to Breathe. She was born and raised
in County Meath, near the famed heritage town of Kells and
holds an MA in Creative Writing awarded by the University
of Sussex. Olivia’s second book, The Killer In Me, will publish
in April 2019. 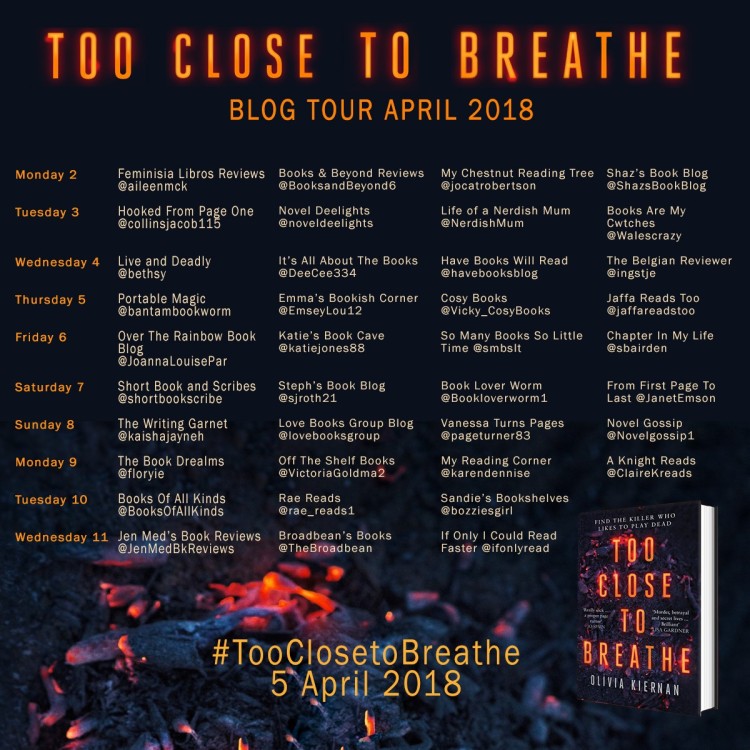