Dr Ruth Galloway is flattered when she receives a letter from Italian archaeologist Dr Angelo Morelli, asking for her help. He’s discovered a group of bones in a tiny hilltop village near Rome but doesn’t know what to make of them. It’s years since Ruth has had a holiday, and even a working holiday to Italy is very welcome!

So Ruth travels to Castello degli Angeli, accompanied by her daughter Kate and friend Shona. In the town she finds a baffling Roman mystery and a dark secret involving the war years and the Resistance. To her amazement she also soon finds Harry Nelson, with Cathbad in tow. But there is no time to overcome their mutual shock – the ancient bones spark a modern murder, and Ruth must discover what secrets there are in Castello degli Angeli that someone would kill to protect.

This is the 10th in the Dr. Ruth Galloway series and a must read for followers of this Norfolk crime series.

Although the setting here is divided between the sun filled town of Castello degli Angeli in Italy and Norfolk, the emphasis in this book is very much on the relationships between the characters we loyal readers have come to know and feel at home with. For that reason, I would not recommend this book as a good jumping off place to begin reading the Galloway series.

Ruth is contacted by an old acquaintance, Angelo Morelli, who invites her over to take a look at a recent archaeological find in the hope that she can help assure the TV production company that the Angelo’s find is newsworthy. Still recovering from the death of her mother she decides that a working holiday might be just what the doctor ordered, so she and her daughter Katie head off with a friend and her son. It is not long after they arrive before the first death occurs and Ruth becomes embroiled in finding the truth behind the killing.

I wasn’t overwhelmingly drawn into the Italian crime; the setting was fabulous and I enjoyed the whole idea of an academic archaeologist desperately trying to hang on to his TV series, but what was happening back in Norfolk was altogether more dramatic and sinister, whilst in Italy everything has a much more languid feel to it. It was therefore a little harder to care about the crime being solved, although that aspect was neatly enough done.

While Ruth is away, and D.C.I. Harry Nelson has flown over with Cathbad to see her, DS Judy Johnson is left holding the fort in the police station. A recently released prisoner is giving cause for concern and though he seems harmless enough now that he has found God, the memories of his swearing to get back at those who put him away are enough to warrant giving him a stiff talking to.

Meanwhile DS Tim Heathfield is back from Essex to attend a wedding. His return to Norfolk gives more than one person pause for thought.

From the outset, you feel that there is a kind of inevitability to what then happens, but that makes it all the more poignant and all the more difficult. It is hard to know where Elly Griffiths will take the series from here, but it feels like a life changing moment and one that will have profound consequences for many of the relationships in this series.

In summary, I did very much enjoy it for the characters and their domestic lives. I thought the Italian aspect of the plot was a little lighter and less well fleshed out than usual, but this time my focus was really very much centred on the Norfolk characters and the development of their relationships. This element of the storyline was, quite simply, unmissable 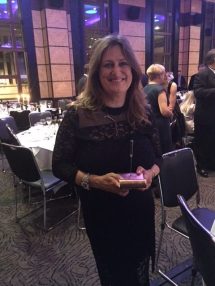 Elly Griffiths is the pen name of Domenica de Rosa and she has written four books under her own name. She was born in London in 1963 though her family moved to Brighton when she was five. She wrote her first book when she was a 11, a murder mystery set in Rottingdean, near the village where she still lives.

Elly read English at King’s College London and, after graduating, worked in a library, for a magazine and then as a publicity assistant at HarperCollins. She became Editorial Director for children’s books at HarperCollins.But it wasn’t until she was on maternity leave in 1998 that she wrote what would become her first published novel, The Italian Quarter.

Three other books followed, all about Italy, families and identity. By now Elly had two children and her husband Andy had just given up his city job to become an archaeologist. They were on holiday in Norfolk, walking across Titchwell Marsh, when Andy mentioned that prehistoric man had thought that marshland was sacred. Because it’s neither land nor sea, but something in-between, they saw it as a kind of bridge to the afterlife. Neither land nor sea, neither life nor death.  Elly says “As he said these words the entire plot of The Crossing Places appeared, full formed, in my head and, walking towards me out of the mist, I saw Dr Ruth Galloway. I didn’t think that this new book was significantly different from my ‘Italy’ books but, when she read it, my agent said, ‘This is crime. You need a crime name.’

And that’s how I became Elly Griffiths.”