Ellery Hathaway knows a thing or two about serial killers, but not through her police training. She’s an officer in sleepy Woodbury, MA, where a bicycle theft still makes the newspapers. No one there knows she was once victim number seventeen in the grisly story of serial killer Francis Michael Coben. The only one who lived.

When three people disappear from her town in three years–all around her birthday–Ellery fears someone knows her secret. Someone very dangerous. Her superiors dismiss her concerns, but Ellery knows the vanishing season is coming and anyone could be next. She contacts the one man she knows will believe her: the FBI agent who saved her from a killer all those years ago.

Did you read Final Girls by Riley Sager? I could not help but think of it as I was reading Joanna Schauffhausen’s  The Vanishing Season. Not because the books are similar, but because our protagonist Ellery Hathaway is a Final Girl – the lone survivor of terrible killings; the one whose psyche has been massively impacted by her experiences and who knows that, although she is a survivor, she will never be quite the same again.

I understand that this is a debut novel, but honestly, starting to read this book was like slipping into a very comfortable pair of slippers. You know that way when you pick up a book and read the first few pages, you just know you’re going to enjoy the writing style and find the story interesting? Well The Vanishing Season was all of that for me.

Abby Hathaway, who these days uses her middle name Ellery, is a member of Massachusetts’ Woodbury Police Department. Her survival of her childhood kidnapping has led her to alter her name and move across the country to a rural backwater whilst using her training and experience to help protect the community she has chosen to live in.

When three people go missing in three years, Ellie is sure that there is something of a pattern developing and that these are not simple runaways. To make matters worse, Ellery has been receiving an anonymous birthday card on each of these years, even though she has never said when her birthday is. It seems likely that someone out there knows the secret she has been trying to hide.

When Ellie cannot make the Chief of Police listen to her theories, she falls back on the one man she can believe in, the FBI agent who rescued her from the sick, sadistic, serial killer Francis Coben.

Reed Markham is that agent, though these days he is doing no more than trading on his once good reputation and has let his work and his life get into a terrible mess with sad consequences for both.

He agrees to help Ellie on what he describes as an ‘informal basis’, mainly to cover up the fact that he has been put on indefinite leave from the FBI. Together, they begin to investigate a pattern of disappearances that it soon becomes obvious are almost certainly linked to Ellie’s past.

Joanna Schaffhausen has created a fascinating character in Ellery and it is hard not to like her and her adorable dog, Bump, even if she goes to unconventional lengths to have her views taken seriously. I also liked the flawed but savvy character of Reed Markham – these two make a good investigative pair.

I did think that there could have been more weight given to Markham’s suspicions about Ellie – there was ample scope to rack up the tension there which never quite materialised.

Overall though I enjoyed it and thought it was a satisfying and enjoyable read with a strong climax. Recommended. 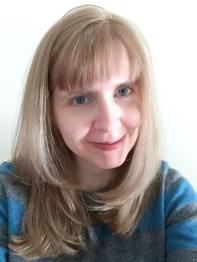 Joanna is a scientific editor who spends her days immersed in research on potential new therapies for cancer, addiction, and neurological disorders such as Alzheimer’s disease. Previously, she worked as an editorial producer for ABC News, where she advised and wrote for programs such as World News Tonight, Good Morning America and 20/20. She lives in the Boston area with her husband and daughter. The Vanishing Season is her first novel.