It’s winter, the nights are dark and freezing, and a series of seemingly random assaults is pulling DI Marnie Rome and DS Noah Jake out onto streets of London. When Marnie’s family home is ransacked, there are signs that the burglary can have only been committed by someone who knows her. Then a child goes missing, yet no-one has reported it. Suddenly, events seem connected, and it’s personal.

Someone out there is playing games. It is time for both Marnie and Noah to face the truth about the creeping, chilling reaches of a troubled upbringing. Keeping quiet can be a means of survival, but the effects can be as terrible as killing.

I have been a massive fan of Sarah Hilary’s D.I. Marnie Rome series since her first book, Someone Else’s Skin (which won the Theakston Crime novel of the Year in 2015). That’s why I rushed to sign up for the blogtour because I want everyone to have the opportunity to read and enjoy this series.

This is D.I. Marnie Rome 4 and if you haven’t yet read the others, do yourself a favour and get buying now – you will not regret it.

Marnie Rome’s parents were murdered by her foster brother, Stephen Keele, in their home. He is serving a life sentence for their murder, but Marnie is haunted by the need to know what drove him to it.

Six years later, her parents’ house, let out because she cannot bear either to sell it or to live in it, has been ransacked and both the tenants have been subjected to a severe beating. It seems all too likely that Stephen Keele is behind it, but Marnie needs to know why. Though she is, of course, not investigating the case, still she needs to understand what has happened. This crime is deeply personal to her.

At the same time, Marnie’s partner, D.S. Noah Jake and his live in partner, Dan, are worried about Noah’s brother, Sol. Sol has been too closely involved with some of the teenage gang culture in London and Noah is really worried about keeping Sol on a crime free track.

Hilary creates beautifully drawn characters. You like and respect Marnie Rome and feel just how buttoned up she is. Noah Jake is such a great character, too that you will him to succeed and be happy.

Quieter Than Killing is set during a harsh London winter and we are again in run down council estate territory. As with Hilary’s first three Rome books, each book stands very well on its own, but read seriatim, they form an uncomfortable picture of our fractured society where predators are able to feed on alienated youngsters because deep down, so few of us actually care about the lives of the dispossessed and society does not have the resources to deal with them. I recently read a report from the Child Welfare Inequalities Project which showed that young people from the most deprived 10% of neighbourhoods are almost 20% more likely to be on the child protection register. This, then, is Hilary’s territory.

There have been vicious attacks on three released convicts, and Finn, a child, has gone missing, all leading to a tense and thrilling plot which leads Marnie closer to a disturbing truth. Each victim has been punished in a way that reflects the crimes for which they were imprisoned, so when one of the victims dies, Marnie and Noah speculate that they may be looking for a vigilante killer.

The devilish thing about Sarah Hilary’s books is that she raises a lot of questions and sparingly supplies some answers. So, just as you think you are getting closer to understanding what Marnie’s backstory really is, you find once again that you have more questions than revelations, though what we do find out is explosive. But this is a book where Marnie’s story takes centre stage and while she reveals very little to us, when she visits her foster brother, now in Cloverton, an adult prison, he is getting colder and crueller over his need for her to face what he sees as his ‘truth’.

When Noah is attacked with a baseball bat (Sarah Hilary, how could you?!) while investigating the disappearance of someone related to the cases, he thinks he recognises his attacker.

Meanwhile, a prisoner inside Cloverton is beaten up and when Marnie goes to seek answers, she finds out a lot more than she bargained for. It seems that Keele may be connected to the vigilante attacks and then she discovers that there is a shared experience between her and Stephen Keele that she was unaware of, but which connects them intimately.

To add to Marnie’s woes, her lovely boss, Tim Welland, is on sick leave and DCS Lorna Ferguson is brought in. Ferguson is an ambitious woman and Marnie has to carefully negotiate her way round her new boss as the case takes on a deeply personal angle.

There are lots of tense and dramatic twists and turns as the novel reaches its climax, so much so that I could feel my stomach clenching at the end of the book.

Quieter Than Killing is a superbly crafted book. Beautifully written, with characters you care about, it is an exceptional crime novel and Hilary’s best yet. It is a riveting read that is almost explosive in the tension it creates.

I can’t praise these books highly enough. They are all, in my view, 5 star reads, and if I could I’d give this one 6 stars.

Sarah Hilary has worked as a bookseller, and with the Royal Navy. Her debut, SOMEONE ELSE’S SKIN, won Theakstons Crime Novel of the Year 2015 and was a World Book Night selection for 2016. The Observer’s Book of the Month (“superbly disturbing”) and a Richard & Judy Book Club bestseller, it has been published worldwide. NO OTHER DARKNESS, the second in the series was shortlisted for a Barry Award in the US. Her DI Marnie Rome series continues with TASTES LIKE FEAR (2016) QUIETER THAN KILLING (2017), with COME AND FIND ME out in April 2018. 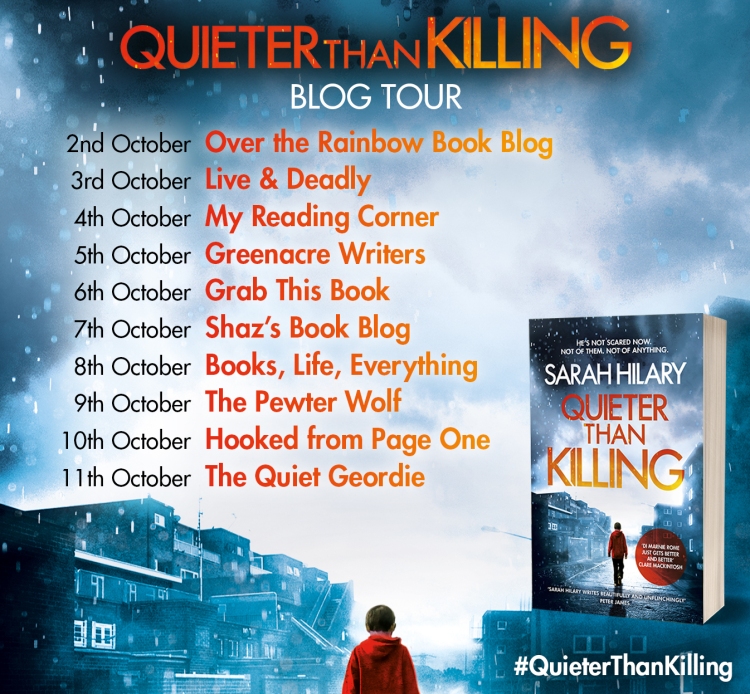