On Midsummer Eve in 1985, a young folklore researcher disappears from the village of Eidsborg in the Telemark region of Norway.  Exactly thirty years later, the student Cecilie Wiborg goes missing. She too had been researching the old, pagan rituals associated with the 13th-century Eidsborg stave church.  And then Knut Abrahamsen, a former police officer from the area, is found drowned in the nearby Tokke River, a presumed suicide since his pockets were filled with stones.

Hearing of the death of his former colleague and friend, private investigator Max Fjellanger feels compelled to leave his long-time home in Florida and return to his native Norway to attend Knut’s funeral. Even though they haven’t spoken in more than three decades, Max is not convinced that Knut killed himself.  There are details about the circumstances of his death that just don’t add up. And there seems to be a link to the case of the missing researcher in Telemark, which the two of them had worked together—until threats from a corrupt sheriff put an end to the investigation and to Max’s career on the police force.

This time Max is determined to find out the truth. Reluctantly he finds himself drawn into a dark universe in which ancient superstitions, religious cults, and sinister forces are still very much alive. And the stave church, with its famed wooden statue of Saint Nikuls, is at the center of it all.

Finding an unlikely partner in Tirill Vesterli—a university librarian and single mother who is obsessed with crime novels—Max is plunged into a menacing world of ghostly monks, severed pigs’ heads, and mythic rites, all somehow connected to Midsummer Eve, which is fast approaching. As Max and Tirill quickly learn, it’s a misconception that the past is past—the truth is that it’s never over.

Max Fjellanger left Norway and the Norwegian Police force 30 years ago, ashamed of a decision he made which he knew then was a cowardly act and which he has spent his life regretting. He immigrated to Florida where he set up a detective agency, which has now grown sufficiently to enable him to simply oversee work, rather than get his hands dirty.

In Florida he met and married his wife Anne, but he is recently widowed. When Max hears of the death of his former colleague, Knut Abrahamsen, he decides to return to Norway and attend the funeral.

Both Max and Knut had been involved in the search for Peter Schram, a folklore researcher who disappeared on Midsummer Eve. Schram was never found and this is the case that has followed and haunted Max ever since. When he meets Knut’s wife his suspicions about Knut’s cause of death are aroused and he decides to stick around to see what he can find out.

Vidar Sundstøl is not a writer I know of, but his story had me hooked in from the beginning. Richly atmospheric, with a real sense of place and small town life, his book is populated with characters you want to know more about.

He expertly takes the core of the town’s folk legend and weaves it into the heart of his crime thriller. Here we find the stories of ancient Norse gods worshipped by the townspeople for centuries; traditions steeped in mythology and legend and very real, contemporary crimes.

In a small town, it is hard to stay under the radar, and Max soon begins to realise that he is the target of some hostility, but whether because he is poking his nose in where it doesn’t belong, or because he is stirring up unwelcome truths is not clear to begin with.

Early in his enquiries, he meets Tirill Vesteri, a single mother to Magnus and an avid crime reader. Tirill has her own theories about a woman who disappeared in the town around midsummer; theories which the police have roundly dismissed. But when Max encounters Tirill at her work in the local library, he realises that his two cases have something in common with the third disappearance, that of Cecilie Weiborg.

Together they begin to piece together the different stories. Max uses his research and investigative skills and Tirill puts into practice what she has learned from years of studying detective fiction. Here the reader can so easily put themselves in Tirrill’s place, and work side by side with her detective. They work pretty well together and their various skills enable them to bounce ideas off each other on the way to solving the mystery. These are fascinating characters with whom it is easy to identify and together they make a formidable team.

The action takes place in the Telemark region of Norway, where the main source of income is farming, and central to the story is the old stave church. A stave church is a medieval wooden Christian church whose name derives from the buildings’ structure of post and lintel construction, a type of timber framing where the load-bearing ore-pine posts are called stafr in Old Norse.

The stave church of Eidsborg is a real place with hundreds of years of history, folklore and culture in its eaves. It was easy to imagine that tales of ghostly monks and walking statues would have permeated the town and I loved the way that stories of pagan rituals entwined with academic study to create a fascinating, taut and suspenseful tale.

I was engrossed in the story and really enjoyed the characters of Max and Tirill as they struggle to make sense of what they know.

Highly recommended and a quite different take on my usual Nordic Noir fare. 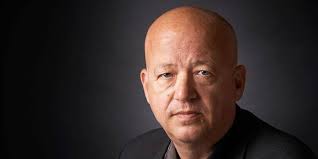 Vidar Sundstøl won the prestigious Riverton Prize for the Best Norwegian Crime Novel for The Land of Dreams, the first volume of his acclaimed Minnesota trilogy, published in the United States by the University of Minnesota Press. The other two volumes are Only the Dead and The Ravens. Sundstøl has lived in the United States and Egypt, and now resides with his family in Telemark, the setting for The Devil’s Wedding Ring.

Tiina Nunnally is an award-winning literary translator. She was appointed Knight of the Royal Norwegian Order of Merit for her contributions to Norwegian literature in the United States.