This blogpost is little later than planned but I blame the sheer frenetic pace of the wonderful Bloody Scotland festival for zapping all my energy. I had the best time ever. Terrific panels, cabaret to wonder at and great chums and chats. I’ve already booked for next year.

First to Saturday night. I was lucky to get a ticket to Crime at the Coo, the now legendary night in a small bar in Barnton Street, ruled over by Mandy, a hostess who loves her Bloody Scotland events. 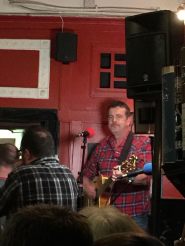 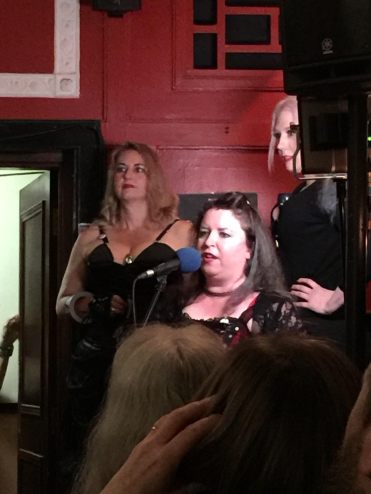 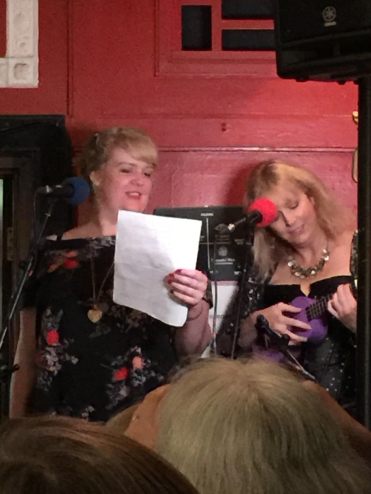 Again compered by the exceptionally nice and very talented Mr. Craig Robertson, this was a bloody fantastic night! We had contributions from Doug Johnston (who can, it appears, do everything from nuclear physics to crime writing to singing and playing the guitar. It is simply not fair). Thomas Enger made my heart sing with his playing and singing of Forever Bloody Beautiful Scotland. Louise Voss played mandolin and Hayley Webster sang; Marsali Taylor sang a traditional song; Mark Billingham and Luca Veste chose such fun songs. It was also Director Bob McDevitt’s birthday and he chose to sing Rhinestone Cowboy which went down very well. Graeme McRae Burnett sang a terrific song about Peter Manuel and the Slice Girls, as ever, brought the house to standing applause. It was great to see a new Slice Girl in the line up – making a guest appearance, US novelist Harley Jane Kozak more than rose to the occasion. Chris Brookmyre sang a song using his favourite word – enough said!

Susi Holliday performed a gruesome reading while Steph Broadribb, looking as if she were enjoying herself far too much, did terribly painful things to a tied up and strapped down Simon Toyne. (I won a prize for making pain noises).

The evening’s cabaret ended with a tremendous rendition of Bohemian Rhapsody which all the crime writers present participated in. It was honestly the best night of my year. Such fun!

So you will understand that Sunday morning took a little more effort for me than usual, but the first panel I attended was just the tonic I needed. Caro Ramsay, Lisa Jackson and Harley Jane Kozak, chaired by Alexandra Sokoloff, took us through the inspiration behind their leading protagonists, discussed the various locations for their settings and talked about how they came into crime writing. Harley, Lisa and Alexandra, had all been working in the film industry – Harley as an actress, Lisa in research and scripting, Alexandra in scripting and producing. Caro started her crime writing career whilst in hospital with a bad back injury. They talked really engagingly about their books, how their characters take on a life of their own, even when they don’t want them to, and the quite different ways in which they write. It was a lively and engaging discussion and just right to set my mind working again (that and the triple espresso).

Then it was on to Pitch Perfect, I think the most important slot in the Festival, alongside the Crime in the Spotlight slots. This is where new authors, selected through competitive competition, get to pitch to a panel from the publishing industry, who then feed back on the pitches and choose a winner.

This year’s panel comprised Jenny Brown (agent and in the Chair); Jo Dickinson, Publishing Director at Simon & Schuster; Keshini Naidoo, Associate Publisher at Bookouture and Jade Chandler, Editorial Director for crime fiction at Harvill Secker and agent Jemima Foster. What a brilliant opportunity for new writers to make and refine their pitches. Previous winners such as Steph Broadribb and Matt Weslowski have gonne on to become acclaimed published writers – and that was the focus of a follow up panel – The Graduates, Past Perfect. 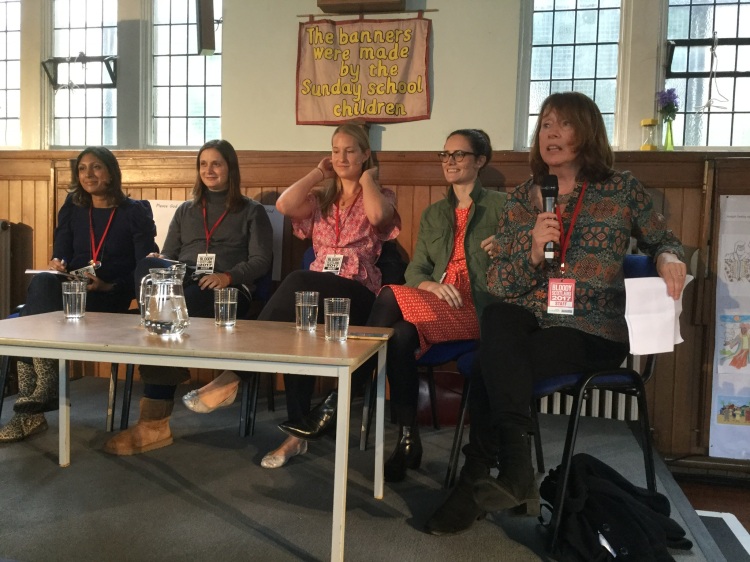 I thought it was a huge privilege to be listening to new writers pitching their work in 3 minutes and learned quite a lot about the whole pitching process just by listening.

Mark Whiteman and Maggie McShane were both declared winners, though all of the pitches were highly commended and I especially enjoyed a pitch from Glasgow writer Ajit Panickar, whose Inspector Chapati novel, The Arms of Durga, had me wanting to hear more. Interestingly, the panel chose two winners because they felt that one was well suited to a traditional publishing house, whilst the other would work extremely well for a digital publisher like Bookouture. Though the panel didn’t explicitly say so, I’m fairly sure that Mark Whiteman’s pitch for his Waking the Tiger – an exploration of historic Singapore during the time of the rise of imperialistic Japan with a Eurasian detective and a very strong female character, would have been the traditional publisher choice.

Maggie McShane’s The Mercy Season takes her knowledge of the travelling community to set her novel in a fairground and her leading protagonist, Portia* Stirling is a lawyer who has left her fairground background behind long ago – until she takes a case that brings her back to that world. (*Who does not know whether she was named after a Shakespearean chracter or her father’s favourite car).

The panel made some very salient points about publishing and the need for pitches to have chracters that leap out of the page and show that the author has a grip on characters, pace and plotting. Not a lot to ask for in 3 minutes, eh?

Then I confess I was torn. I really wanted to go and listen to Forensic Anthropologist Professor Sue Black in a session entitled Getting Rid of the Bodies, buut that clashed with another event, one of a very few Fringe events at the Conference, which Bloody Scotland was pleased to include in their programme and indeed, it was great that Bob McDevitt turned up to see how it went.

Our own Sharon Bairden very ably chaired a panel of self-published authors in a session entitled Writers Are Doing It For Themselves. Alan Jones, Alison Baillie Taylor and David Videcette discussed self-publishing and how and why they chose that route to publication. Each writer had a different route to self publication and their experiences were both fascinating and enlightening.

For David Videcette, it was a clear and informed choice not to go with an established publishing house. He had been approached by a big reputable publisher and had worked on his first book The Theseus Paradox with an editor for 6 months. But the constraints of a big publishing house, and their need for his book to fit in to the relevant slot on their list, meant that he would have to surrender too much editorial control. So he decided to take the self-publishing route.  David was really clear on the fact that he is the brand, not his book and that he spends quite a lot of time and energy establishing himself as an authoritative expert on terrorism and organised crime and he makes a point of engaging on social media as part of that brand. As an example, this morning, I see him tweeting about the anniversary of 9/11.

Alison Baillie Taylor (writing as Alison Baillie) started to write her book, Sewing The Shadows Together  as a retirement project, to see if she could do it. Encoraged by feedback from friends and family, she thought she might try and find an agent, but no-one snapped it up. However, she continued to receive positive feedback from those who read it and the decided to go to a self-publishing company, Matador who assist self publishing authors. Alison was very clear, as were each of the authors, about the need to involve professionals in all the important components of self publishing. So editors, typesetters, cover designers are all very important to help make your self published book a success.

Alan Jones did have some interest from an agent for his novel, Bloq but sadly the agent felt that although the book was good, it was too similar to another that he had on his books and it was the agent that suggested to him that he should self publish. Alan found that researching publishing online was very helpful as there are lots of online resources that can help – he cited Smashwords as a helpful resource for simple instructions on how to format your manuscript.

Each author was really warm and supportive of the role of bloggers and Facebook Book Clubs as a means of getting the word out on new books. For self-published authors this is the best way to create a buzz about your books and one of the best marketing tools around.

But all were equally clear that first your book has to be good – and that if it is, and you have employed the right professional tools and people to assist you, then a good book can rise to the top. What are the qualities needed for self publishing success? Perseverance, a belief in your work and the ability to learn new skills.

So, would any of these self-published authors snap up a book deal if it came along? Well, of course, the dream is to be able to make a full time living from writing, but while one or two of them might think seriously if such an offer came along, the absence of publisher pressure for deadlines and new books is an attractive plus, as is the ability to retain full editorial control, so any such offer would be carefully scrutinised before any deal was done.

Each author is working on a new novel. Alan is moving away from crime for his next book and is currently researching a wartime historical novel based in Germany. Alison’s new book is out to beta reafders at the moment and she has a publisher interested..meanwhile David’s D.I. Flanagan is headed abroad to work on his next case. They all sound fascinating.

As for literary success, well, apart from the ability to make a living, these authors count their success in terms of being able to strike an emotional response in their readers. If enough readers can just love their books, that’s sufficient success for them.

Well, gentle reader, that was all I had the time and the energy to cover. There were so many other great panels and authors that I did not get to, but I’m so glad I chose those I did.

A final thanks to everyone who was kind and helpful to me; to Craig Robertson and Alexandra Sokoloff for inviting me to join them at dinner with Harley Jane Kozak, Felicia Yap and others. To Kelly Lacey for offering me her frienship and support and introducing me to so many great people. And finally, though definitely not last, to the awesome Sharon Bairden for being so much fun and introducing so much laughter into my weekend.

Bloody Scotland had another stellar year in terms of ticket sales. Audience numbers grew by 30% reaching 8474 compared to 6537 in 2016.
I have already booked for the next Bloody Scotland – have you put the dates of 21-23 September 2018 in your diary?

- Writings for thoughtful and reflective moments.