Well, gentle reader, it is just as well there was a slower start to the first full day of the festival. Following the inspirational Gala evening with its emotional torchlight procession to the Albert Halls for the celebration of 30 years of Rebus, I headed of to the Never Mind the Buzzcops quiz, ably compered by Craig Robertson and with Mark Billingham and Val McDermid respectively captaining the teams.

Great fun was had by all, not least during the playing of the kazoo by Chris Brookmyre and Stuart Neville and then watching A.K.Benedict miming various crime novel titles in a charades does crime round.

This was followed by a terrific set from the Fun Loving Crime Writers which had everyone up dancing at the front. A medley of songs were played including an unaccompanied solo from Val, proving that she can indeed sing like a linty, to country and western and rock. There was a distinctly criminal flavour to the song choices and the sight of Mark Billingham singing Psycho whilst looking psychotic was something to behold. 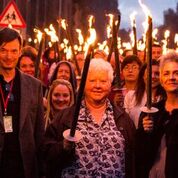 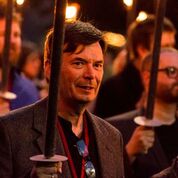 Today I went to listen to Alex Gray chatting to Police Scotland’s Deputy Chief Constable, Iain Livingston, QPM and DS Duncan Sloan. Their session, The Policing Behind Procedurals was all the more fascinating because of course DCC Livingstone must be in poll position for the top job at the moment.
Topics covered included the difficulties faced by younger front line police who are usually the first responders at a crime scene and how difficult it can be to face the fears that violent crimes can induce.

Livingstone talked about how the police had evolved from the days when counselling involved going to the pub, to the present day where Castle Grey in Auchterarder can now provide a range of psychological and psychiatric help. They also talked about the additional scrutiny that now rests on Police Scotland as a result of unifying the force and the challenges that brings, along with a welcome increase in transparency.

Alex challenged them to say whether she was getting the detail right, and they agreed that a lot of what she writes is indeed accurate, but that of course it would be a boring book if there were not imagination and authors invention brought to bear on the storylines.

I took a little time out to help to launch Michael J. Malone’s book, The House of Spines at a pop up launch outside the Albert Halls. I helped with one of publisher Karen Sullivan’s launches last year and enjoyed it so much that I came back for another round. It always helps when you know you are launching a good book!

Sarah Savitt, Publisher at Virago, and Sam Baker, Co-Founder and CEO of The Pool, announced that the winner of the Virago/The Pool New Crime Writer Award is Lara Thompson for her debut novel One Night, New York.

Val McDermid gave Thompson the award on stage immediately before her own sell-out event at Bloody Scotland. Thompson took over the ‘Crime In the Spotlight’ slot at the McDermid event normally reserved for published but not yet famous authors and it is such a great opportunity for writers – I have heard some great readings this year.

Lara Thompson read a page from her manuscript in front of the crowd of more than 600 crime fans. She has won a publishing contract with Virago as well as two hours of mentoring from acclaimed novelist Jill Dawson courtesy of Gold Dust mentoring. One Night, New York is Lara Thompson’s first novel.

The Virago/The Pool New Crime Writer Award was launched in February this year to discover an exciting new author for the Virago list who was writing a suspenseful, intelligent, original crime or thriller novel. To enter the competition, writers had to submit a 5,000-word sample plus a 500-word synopsis.

With Denise Mina becoming the first woman to win The McIlvanney Prize for Scottish Crime Book of the Year and tonight the Slice Girls taking to the stage at the sold-out cabaret ‘Crime at the Coo’ with a burlesque-esque act they created to ‘counter the testosterone prevalent at crime festivals, it’s a great time to be a woman in crime fiction.

Other events I attended today included a panel with M.J. Arlidge, Chris Dolan and Robert Thorogood. All are well established television writers and novelists, and indeed Matt started his career on EastEnders scripts. I took the opportunity after the session to ask Matt if he was ever likely to be a bit kinder on poor beleaguered Helen Grace, but he wasn’t feeling overly sympathetic, so I fear Helen will be in for a rough ride in the next book!

Then it was on to Dark Lands with Ragnar Johnasson, creator of the wonderful Dark Iceland series, Lin Anderson and Thomas Enger to discuss Dark Lands. Thomas Enger is also an accomplished composer and musician and he played us a lullaby that he composed for the as yet unborn son of his protagonist, Henning Juul.

Ragnar, Thomas and Lin discussed the settings for their books; the inspirations for their characters and the impact of the countries they live in on their writing.

Thomas was feeling somewhat triumphant as he displayed the Bloody Scotland trophy which was won by Scotland at the annual grudge match of football. Mr Enger was, of course, playing for Scotland who won the game 6-3. 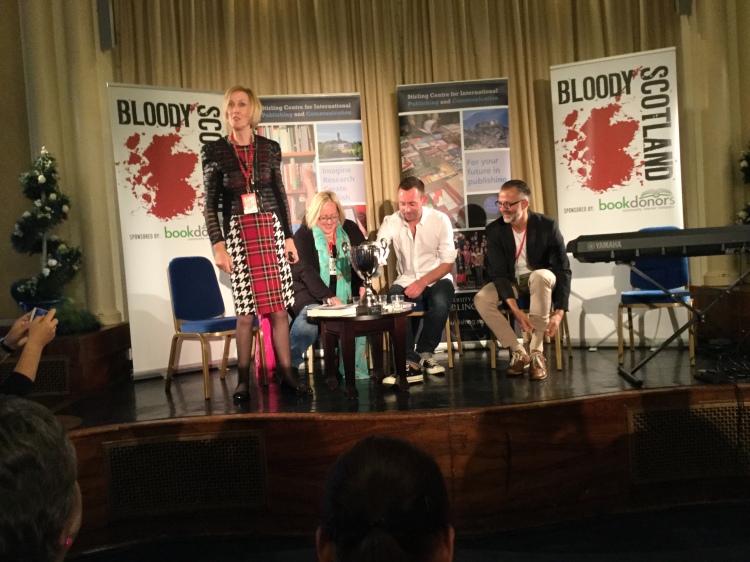 I have heard and met some great new authors today, as well as having a fantastic time at the Festival. Tonight it’s Crime at the Coo with the irrepressible and deliciously sadistic Slice Girls. I can’t wait!