The sun is out. Your little boy is smiling. The next time you look… he’s gone.

Lana Cross would do anything to protect her perfect family but on a trip to an adventure park, they slip out of her sight. When she finds her husband, he’s out cold on the forest floor. Then the truth sinks in: Cooper, her four-year-old son, is missing.

No one stopped the man carrying the sleeping boy. The park cameras don’t show where he went. Then Lana receives an anonymous message, telling her to visit a local school with a horrifying history…

This is no random attack. Whoever took Cooper is playing a twisted game, and if Lana wants to find him, she must participate.

How could there be a link between the school and her missing son? And can Lana find her little boy before it’s too late?

This is the definition of an action packed fast paced thriller. From the very first paragraph the reader is flung head first into the action with a chilling abduction attempt, a heinous villain and an ominous parting shot.

Lana Cross is Cooper’s mum and when a man tries to kidnap Cooper from the family’s back garden it is only the quick reaction of Lana that foils the man’s attempt. That man is Mr Whisper and his parting shot is the very chilling “tomorrow”.

Understandably, after this incident Lana finds it hard to settle and never stops worrying about Cooper. Todd, her husband, has his own preoccupations, which he is keeping secret from his wife.

The Crosses move away from their home and into an anonymous city apartment in a bid to hide away from Mr Whisper and his threat of returning. Though months pass without incident, Lana is obsessed with the idea that Mr Whisper may be out there watching Cooper and she downloads an app to her phone that pinpoints the geographic locations and details of crime and especially murder scenes.  This, she thinks, will help her to find out where Mr Whisper might be, because she has convinced herself that Cooper will only be safe if she can track the kidnapper down.

Then Lana and Todd have a stroke of good fortune; their first in a long time. They win a holiday to the Bluecrest Adventure Park and Todd, in particular, sees this as a way to loosen the grip of Lana’s fear and allow them to start to enjoy life as a family again.

You can see what’s coming next, can’t you?  Yes, you got it. Todd and Cooper go off together on one of the rides but Todd is attacked and knocked unconscious, Cooper is kidnapped, and Lana is left distraught with all her worst fears realised.

The police are of course involved, but for different reasons neither Lana nor Todd think that they will be able to do enough to find Cooper and what then ensues is a divergent storyline where each parent follows their own trajectory in an attempt to locate and rescue Cooper.

When Lana finds her own murder on the app she knows she is dealing with a twisted and sadistic mind and she follows the trail that is laid for her without recourse to Todd or the Police.

Todd, meanwhile, is not as badly concussed as the doctors feared and believing that he knows what is behind Cooper’s abduction, he sets out to track down the guilty party.

For me, this is where it started to go a bit awry. All the right elements are there – this is a fast paced thriller, loaded with suspense. There is lots of action and there is no doubt that Richard Parker has created a villain quite worthy of a thriller.  But I didn’t like the way that Lana and Todd pursued separate courses of action; I thought the holiday was a bit too convenient and though the backstory and the killers motive is well tied together at the end of the book, altogether the whole thing just did not quite gel for me in the way I hoped it would.

I think with a better edit, this could have been a killer book. However,  it is a solid and perfectly decent read and I know that others have really raved about the book, so perhaps this one is a case of “it’s not the writer, it’s me”.

Hide and Seek is published by Bookouture on August 31st 2017 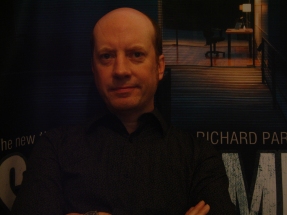 Richard Parker worked as a professional TV writer for twenty-two years and started by submitting material to the BBC.  After contributing to a wide variety of TV shows he became a head writer, script editor then producer.

He then decided to subject himself to the easy streets of writing and getting a novel published.
A ten year cornucopia of disappointment followed.  But STOP ME was picked up for publication in 2009.

It was shortlisted for the CWA John Creasey (New Blood) Dagger Award 2010 and entered the Amazon Top 10 bestseller chart.

His third stand alone, STALK ME, followed and was a huge hit in the UK and US Amazon charts.

Richard has signed a  three book deal with Bookouture .  FOLLOW YOU, and HIDE AND SEEK have been published in this year and a third is to follow in December.

He now lives in Salisbury but can always be lured back to London with the promise of an obscenely long lunch.