You have just one lifeline to the past: your diary. Each night, you write down the things that matter. Each morning, your diary tells you where you were, who you loved and what you did.

Today, the police are at your door. They say that the body of your husband’s mistress has been found in the River Cam. They think your husband killed her two days ago.

Can you trust the police?

Can you trust your husband?

Can you trust yourself?

For reasons that become clear during the course of the book, Yesterday is set with a 24 hour time period. When you read as much crime as I do, you are always on the lookout for something different, challenging and that sets your thinking, as they say, outside the box.

Yesterday does all that and is hugely enjoyable into the bargain. Set in the contemporary parallel world of monos and duos; monos can only remember the past 24 hours, duos have 48 hour recall and those very few who can remember further back are labelled mentally ill. Everyone keeps a searchable iDiary in order to remember the ‘facts’ they need to live their lives.

This is a society where duos are considered superior, mixed marriages between duos and monos are frowned upon and it is fertile ground for Felicia M Yap to play with the idea of unreliable narratives within this context.

Mark Evans is a duo and when he married mono Claire, his family disinherited him. When we first meet him he is in the midst of transitioning from a successful novelist to aspiring elected politician in Cambridge. But Mark has secrets that he is keeping from everyone, including Claire.

When Sophia Ayling’s body is discovered in the River Cam, the police find Mark’s name in her diary and he is brought in for questioning by D.C.I. Hans Richardson.  The narrative moves between past and present and back and forth among Mark, Claire, Sophia’s iDiary entries, and the detective, D.C.I. Richardson.  This 4 person narrative told through iDiaries and internal monologues is a rather nice way to set out the events of the book and the different characters perspectives.

As Claire struggles with the idea that Mark could be a suspect in Sophia’s murder, she knows that she has to have answers, but when you can only remember yesterday, what hope is there of ever finding the truth?

I enjoyed this book a lot, thanks to its unique perspective and it is certainly an accomplished debut novel. I particularly enjoyed the complex and struggling character of D.C.I. Richardson, a different kind of detective I’d like to read more of.

Yesterday has some very intriguing ideas and is not without its own killer twists. Overall it is a different and very satisfying read.

Yesterday was published by Wildfire on 10 August 2017 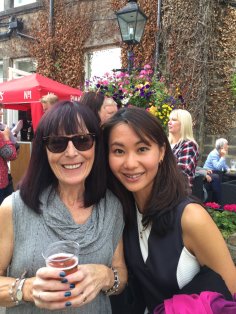 Felicia Yap grew up in Kuala Lumpur. She has been a cell biologist, a war historian, a university lecturer, a technology journalist, a theatre critic, a flea-market trader and a catwalk model. Felicia lives in London and is a recent graduate of the Faber Academy’s creative writing programme. Yesterday is her debut thriller.