Bloody Scotland have announced the longlist for this year’s McIlvanney Prize – and what a fantastic shortlist it is! The winner will be announced at the opening reception at Stirling Castle  and followed by a torchlight procession – open to the public – led by Ian Rankin on his way down to his event celebrating 30 years of Rebus. The award recognises excellence in Scottish crime writing, includes a prize of £1000 and nationwide promotion in Waterstones.

I have read a number of these (links to those I have reviewed above) and it’s pretty clear its not going to be an easy choice.

The judges will be chaired by Director of Granite Noir, Lee Randall, comedian and crime fiction fan, Susan Calman and journalist, Craig Sisterson who between them cover three continents. The finalists will be revealed at the beginning of September and the winner kept under wraps until the ceremony itself.

Seven of the twelve authors longlisted for this years McIlvanney Prize feature in the Bloody Scotland book of short stories to be launched on the opening night of the festival. I can’t wait to get my hands on this book.

Last year the Scottish Crime Book of the Year Award was renamed the McIlvanney Prize in memory of William McIlvanney who established the tradition of Scottish detective fiction. His brother Hugh McIlvanney OBE, came to Stirling to present the prize to Chris Brookmyre who won it for Black Widow. The book went on to be shortlisted for the CWA Gold Dagger and is currently on the shortlist for the Theakston’s Old Peculier Prize to be announced at the Harrogate Festival in July.

Bloody Scotland is Scotland’s International Crime Writing Festival, providing a showcase for the best crime writing from Scotland and the world, unique in that it was set up by a group of Scottish crime writers in 2012.  Full information at www.bloodyscotland.com

Bloody Scotland is supported by the National Lottery through Creative Scotland’s Open Project Funding, Stirling Council, the Open University and Stirling University. Bookdonors have remained the title sponsor for a second year running and Waterstone’s will once again be the festival bookseller. There are  a number of new sponsors including: Shetland Distillery Company, National Library of Scotland, Faculty of Advocates and Stirling Gin 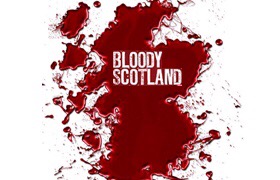