Sam Morpeth is growing up way too fast, left to fend for a younger sister with learning difficulties when their mother goes to prison and watching her dreams of university evaporate. But Sam learns what it is to be truly powerless when a stranger begins to blackmail her online, drawing her into a trap she may not escape alive.

Who would you turn to?

Meanwhile, reporter Jack Parlabane has finally got his career back on track, but his success has left him indebted to a volatile source on the wrong side of the law. Now that debt is being called in, and it could cost him everything.

What would you be capable of?

Thrown together by a mutual enemy, Sam and Jack are about to discover they have more in common than they realise – and might be each other’s only hope.

I’ve loved Chris Brookmyre’s writing for years and  his Jack Parlabane character is a really strong mix of ironic and hard bitten journalist/detective. Parlabane works hard to keep up with the times, but knows that when it comes to stories, the old motives still prevail, even if the methods of achieving them are different.

Want You Gone is the 8th book in this series and Brookmyre has lost none of his edge or humour.

With the decline in the newspaper industry, Jack is struggling to find work, but when he goes to see the online news operation Broadwave, his contacts – and one old friend in particular – a digital hacker called Buzzkill – gives him the lead that he needs to impress them with his ability to ferret out a story.

His lead relates to a pretty stunning data breach at a major hi-tech company and he is determined that he will follow it through to deliver a splash.

Sam Morpeth has a pretty hard life. The 19 year old cares for her sister Lily, who has developmental difficulties. Her mother is in prison and she is trying but failing to sustain her college education because her benefits are being cut, so all that is open to her is the no-hope fast food retail outlet job. On top of all that she is being seriously bullied.

Sam’s real life may be dire, but her online life allows her to be who she needs to be. That is, until an anonymous hacker called Zodiac invades her world and threatens her with losing all she holds dear if she will not carry out the tasks he is stipulating.

Sam reaches out to Jack and he knows that he owes her, so together they embark on a two pronged journey – to keep Zodiac at bay by carrying out the assigned tasks; and to simultaneously discover who this blackmailer is and expose them.

In the process, Parlabane will put both his and Sam’s life in jeopardy (not to mention pissing off his new boss) and he and Sam will have to go into hiding.

But who is Sam really and what is her connection to Parlabane? Can Sam be trusted or will she sacrifice Jack to ensure Lily’s safety?

In this fast paced thriller where no online transaction is truly safe and cyber hacking can lead to the destruction of entire corporations, Christopher Brookmyre has created a brilliantly plotted nightmare scenario. 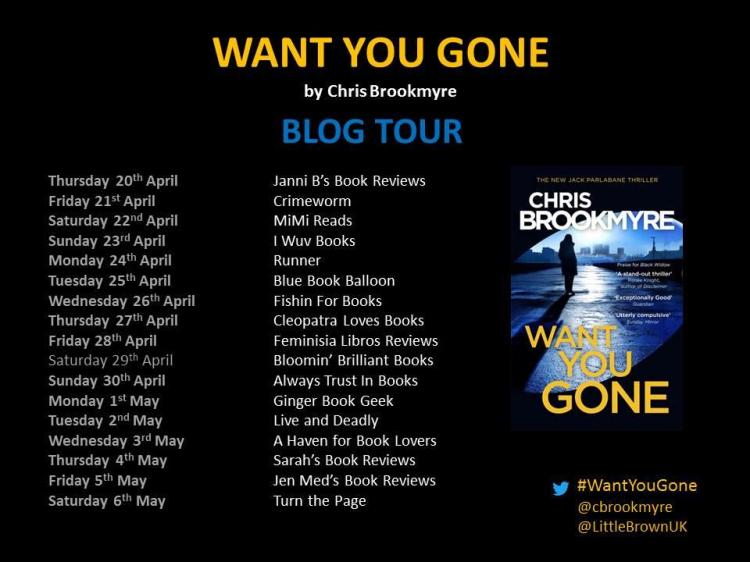 One thought on “Want You Gone by Christopher Brookmyre”