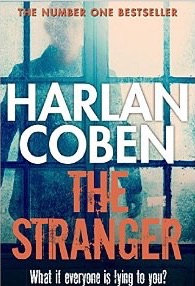 The Stranger appears out of nowhere, perhaps in a bar, or a parking lot, or at the grocery store. His identity is unknown. His motives are unclear. His information is undeniable. Then he whispers a few words in your ear and disappears, leaving you picking up the pieces of your shattered world.

Adam Price has a lot to lose: a comfortable marriage to a beautiful woman, two wonderful sons, and all the trappings of the American Dream – a big house, a good job, a seemingly perfect life.

Then he runs into the Stranger. When he learns a devastating secret about his wife, Corrine, he confronts her, and the mirage of perfection disappears as if it never existed at all. Soon Adam finds himself tangled in something far darker than even Corrine’s deception, and realises that if he doesn’t make exactly the right moves, the conspiracy he’s stumbled into will not only ruin lives – it will end them.
I really like Harlan Coban’s writing, and it doesn’t hurt that he’s a good guy, too. Wasn’t sure what to expect from this one, as I hadn’t enjoyed Missing as much as some of his other books, but The Stranger is a great read and something of a return to his early prose with fast paced action, a likeable average guy central character and a mystery that is novel, intriguing and ultimately devastating.

It starts simply enough- a stranger walks up to Adam at a kids lacrosse game his son is playing in and tells him a secret about his wife that he had no idea about. That secret leads to the disruption and devastation of his world.

And when he sets out to find the truth, he is stepping out on a path that twists and turns and which will lead to lies, the betrayal of friendships and ultimately to more than one death.

It does require a bit of suspension of disbelief, and I did think that the character of the wife, Corrine, could have been drawn out a bit earlier, but it is a really fast paced and engrossing read and I thoroughly enjoyed it.